Back in School? That’s Fantastic

Posted on April 1, 2021 by rosinskynatalie

How excited are your students about schools beginning to open up for classroom lessons?  If their delight is tinged by a bit of uncertainty, given this past pandemic year of interrupted attendance, a recent graphic novel may provide engaging reassurance.  Its blend of fantasy with typical middle school events and issues offers a distanced focus on tween and teenage life—a storytelling step back from real-life school that matches how some kids now feel a bit new and strange in the classroom.  Certainly, The Wiernbook’s Be Wary of the Silent Woods, Book 1 (2020) will please all readers with its fast-paced action, detailed cast of characters, and aptly colored images.

You may already be familiar with some of author/illustrator Svetlana Chmakova’s award-winning graphic novels, in particular her four-book series set in fictional Berrybrook Middle School.   I reviewed its first two insightful, entertaining books—Awkward (2015) and Brave (2017)—here and reviewed the third book, Crush (2018), in this post.  The fourth volume, Diary, is a combination of related short stories and writing exercises that appeared in 2019.  The images in this ruefully humorous slice-of-life series demonstrate Chmakova’s earlier experience as a successful writer and illustrator of manga.  The emotional wide mouths and cartoonish features typical of manga appear in Berrybrook School’s diverse cast of students and teachers and in this new book too. 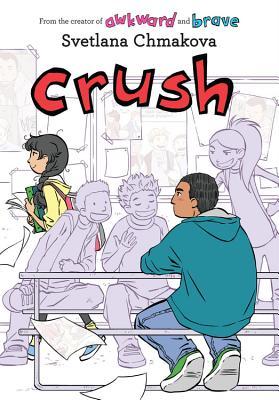 But it is Chmakova’s incorporation of another of her successes—the setting of her urban fantasy series Nightschool: The Weirn Books (2009 -2010)—into Be Wary of the Silent Woods that sets it apart from the Berrybrook Middle School books.  In a recent interview, Chmakova revealed that she missed the fantastic world she had created in Weirn, with its older teen protagonists, and realized that nothing like it had been written for a middle-school audience.  The author/illustrator says that Be Wary of the Silent Woods is an offshoot rather than a continuation of the earlier adventure series, with “a different place, different time, and an entirely different cast of characters, and also a different vibe . . . more lighthearted.”

In its magic-filled New England town close by those silent woods,  supernatural beings, who coexist with humans, cope with daily difficulties in family and school situations that will feel familiar.  Tweenage narrator Ailis finds it hard to wake up in time for school, has a crush on older schoolmate Russ, and is best friends with her cousin Na’yah, with both girls routinely keeping an eye on Na’yah’s kid brother Deesh.  Yet the girls attend school at night, with a curriculum that includes spellcasting and creating defensive charms; Deesh attends “night care” rather than day care;  and Russ is a werewolf!  In this fictional world, Ailis’s family and many of her classmates are “weirn”—magic users who must learn how to use their supernatural powers, a fact that Ailis’ grumpy grandmother often points out.  Weirn are also notable because each has an “astral”—a pet-like supernatural creature bonded to it for life.  These ball-shaped creatures, unlike the daemons in Philip Pullman’s Dark Materials universe, do not speak, but each has a distinct personality and acts about the same age as its weirn.

Astrals play an important role in the book as Ailis and her friends explore a seemingly abandoned house, discovering and ultimately defeating a long-lived, evil sorceress.  The astrals help the kids rescue themselves and a surviving victim too.  As this adventure develops, other weirn characters—“nerdy” Jasper and waspish Patricia—join Chamakova’s broad cast of characters.  Grandma also comes back into play, as Ailis discovers more about her family’s history with the sorceress.  The book’s subplots reveal background information about these characters that enrich and explain what has been their daily behavior.

Each of the 200 page book’s six chapters ends suspensefully, with its final epilog similarly concluding with a hint that the sorceress is not yet dead.  This strongly suggests she will reappear in book 2 of the series, now scheduled for publication in 2021.  Appreciative readers can look forward there to more of Chmakova’s deft visual storytelling, with figures sometimes overlapping panels to unite their action.  At other points, wordless panels carry along some events or situations.  Color also is at times key to the narrative, with full color replaced by sepia to mark old memories and the mysterious epilog hued in subdued lavender and blues.  Chmakova also makes dramatic use of different colors for sound effect words, effectively altering their typeface size and shape to match the events they describe.

Eager readers who cannot wait for book 2 here may want to look at  Chamakova’s nine-part Halloween story, “The Town Tour,” currently on Instagram.  Although its central characters are Berrybrook Middle School kids, weirn youngsters also appear in this story.   Fans will also be happy to hear that Chamakova is at work as well on the next Berrybrook Middle School graphic novel.  It is the first of three new novels she is planning for that series.  Whether inside or outside of the classroom, works in both series are sure to provide satisfying reading.

Like Loading...
This entry was posted in Uncategorized and tagged Be Wary of the Silent Woods, Svetlana Chamakova. Bookmark the permalink.