Zooming Behind the Book Scene

Posted on March 1, 2021 by rosinskynatalie 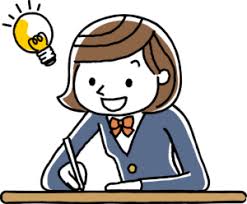 For most students, zoomed instruction has been a poor substitute for in-class learning.  Yet COVID-19’s simultaneous lockdown on author/illustrator visits to schools and bookstores has given readers a wonderful opportunity: an abundance of zoomed interviews with these creative people.  We can see and hear about how new graphic works were conceived and what their authors and illustrators especially want us to know about their work.  For instance, a few weeks ago I had the opportunity to learn about a new novel that will especially appeal to tween/teen and older readers who enjoy scary fiction or are interested in African culture. 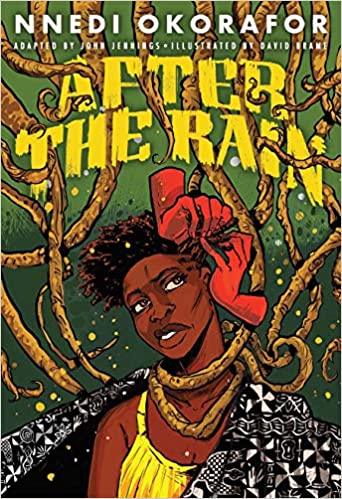 After the Rain (2021), written by John Jennings and illustrated by David Brame, is a wonderful adaptation of a short story by award-winning Nigerian-American author Nnedi Okorafor.   Its brilliant colors, detailed pages, and strong storyline capture Okorafor’s acute observations about Nigerian and Nigerian-American culture.  I was interested to learn—in that zoomed interview with Jennings and Brame–that Okorafor herself, a long-time friend of Jennings, was involved in this book’s creation.  She provided the typical Nigerian cloth pattern featured on both its front cover and interior jacket pages as well as providing feedback on Jenning’s dialogue.   It was also interesting to hear Brame discuss how Jennings’ remarks influenced some of his illustration choices.  Multifaceted Jennings, himself a skilled illustrator as well as author and critic, won awards for the visuals in I am Alfonso Jones, reviewed by me here.)

After the Rain explores the difficulties of belonging to two worlds—a situation familiar to many immigrant families and their kids.  Its central character Choma, a Nigerian-American woman, is a seasoned  Chicago police detective.  Yet the book opens in today’s rural Nigeria, where Choma is visiting her grandmother and great-aunt in their village.  Choma says “I rely on logic and evidence every day in my job.  I depend on it.  It protects me.” But how she co mes to grips with Nigerian traditions and beliefs in the supernatural is at this graphic novel’s heart.  Its gripping images capture and expand the escalating mystery, terror, shock, and slightly ambiguous resolution provided in the original Okorafor short story, titled “On the Road.”  (That work is available in the Okorafor short story collection titled Kabu Kabu.) 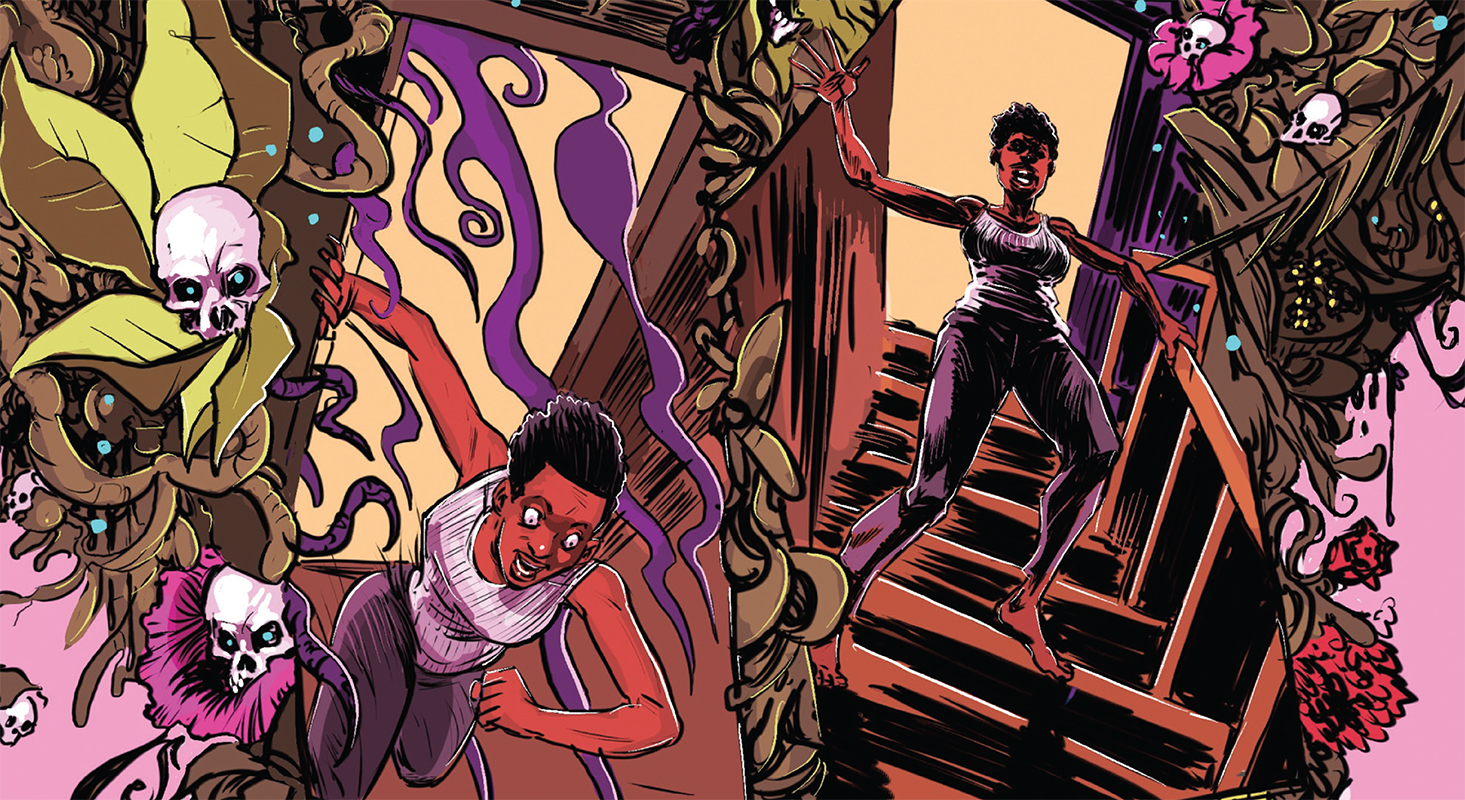 After the Rain begins during a driving rainstorm, with Choma dashing towards the shelter of her grandmother’s small house.  Its blue-purple scenes yield to red-orange backgrounds when Choma,  later opening the door to an gruesomely injured boy, invites him into the house.  He soon runs off, but Choma cannot escape a growing sense of dread and horror.  In the next days, she feels as if she is being constantly watched and followed.  Angled, inserted panels focused on her face or on her entire body as well as whole pages wreathed in ominously entwined geckos or skull-laden flowers convey Choma’s terror.  The sickeningly sweet smell that haunts her is mirrored in the feathery black shadow creature readers see loom behind her on several pages, growing larger from one panel to the next.  Then, Choma’s emotions and experiences, rooted in Nigeria’s traditions about the supernatural,  are shown in surreal images where she meets the “Spirits, masquerades, ghosts, and ancestors” of her Nigerian heritage.  These figures themselves merge the novel’s dominant blue-purple and red-orange palettes. 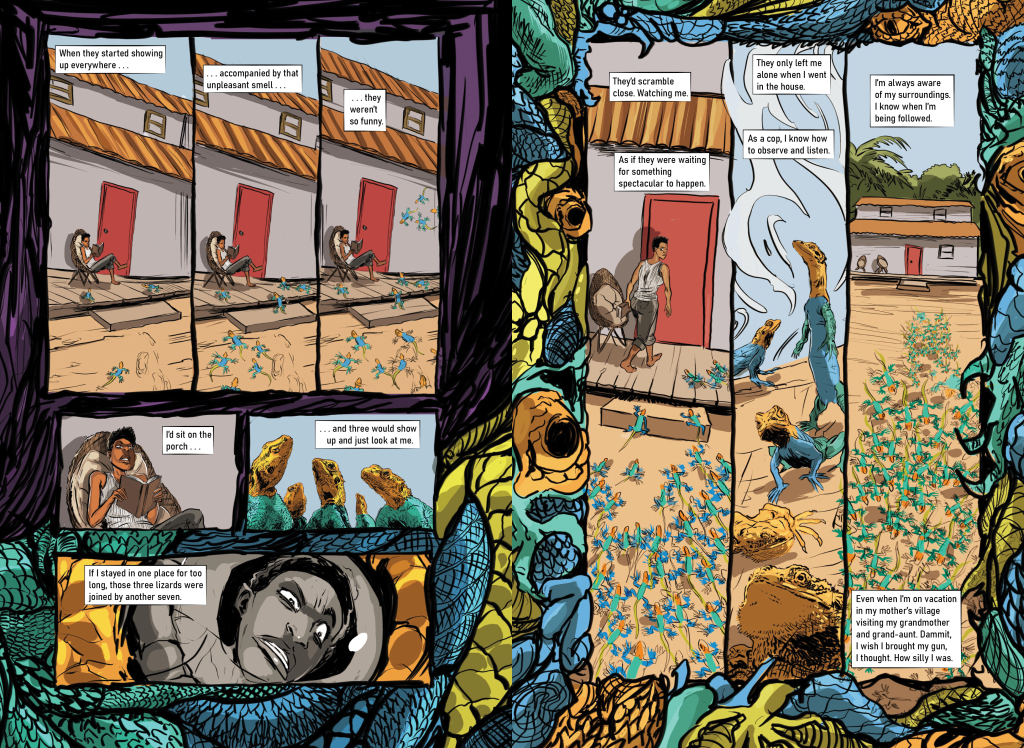 We learn in chilling, thrill-filled, and sometimes gory pages why those disembodied red hands figure so prominently on this novel’s cover.   And the puzzling behavior of Choma’s grandmother and great-aunt during Choma’s terrifying experiences “on the road” is explained before Choma flies back to Chicago.  Her heartfelt conversation with them also reveals how Choma is now finally able to look back and accept a violent act that took place in Chicago, years before she became a police officer.  As a very young woman, she had fought off and killed a man who attacked her.  Brame and Jennings depict this incident in swiftly-moving pages, with close-ups and some wordless panels continuing the breathtaking pace of the Nigerian scenes of terror. 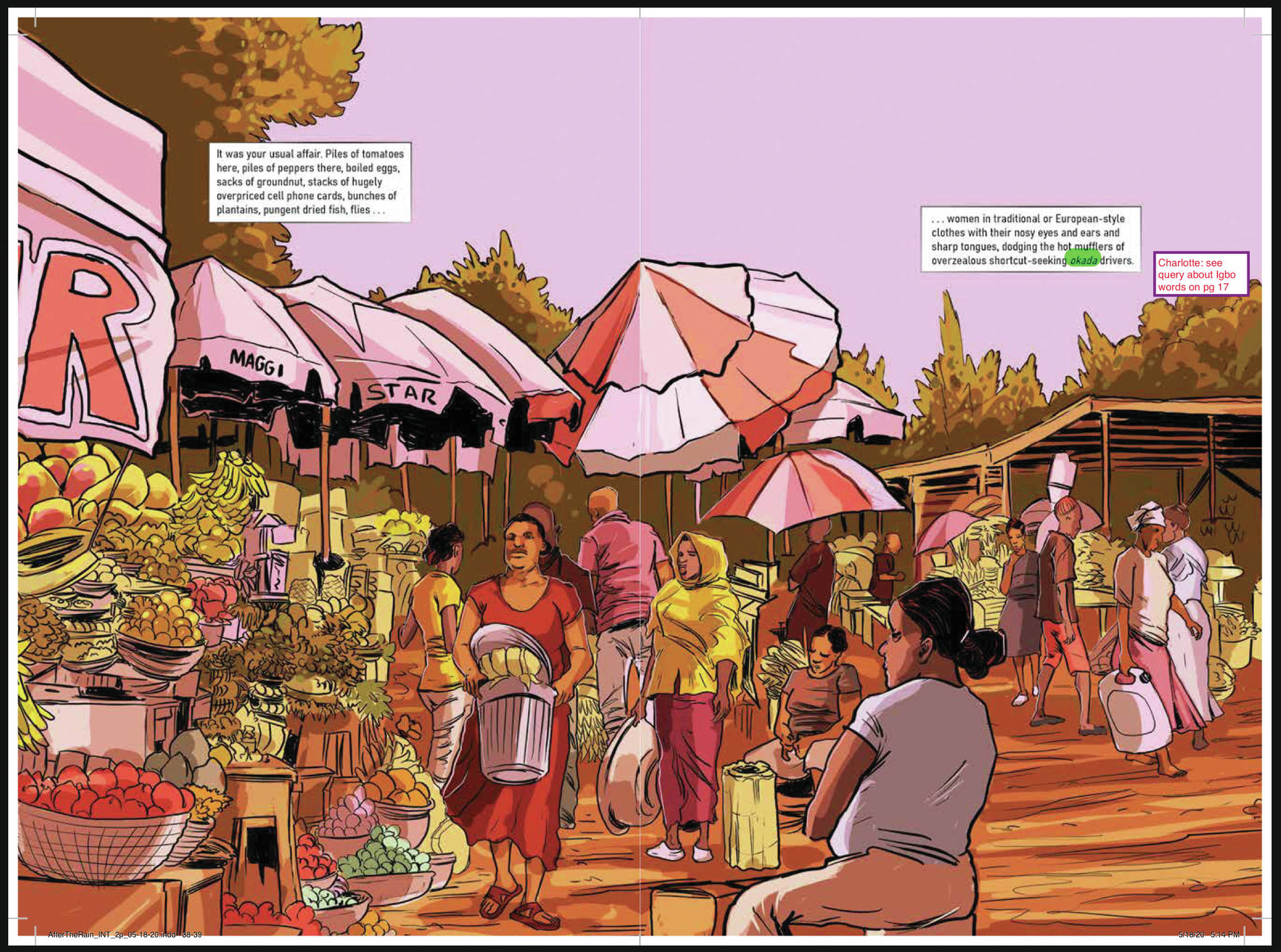 Choma’s experiences with the supernatural in Nigeria have left her a stronger person, freed from the unacknowledged guilt that had haunted her.  As she replies to the taxi driver taking her to the airport, she is not merely “American” but “Nigermerican.  Some of me lives here.  Some of me lives there. . ..”    She does not voice the smiling realization that follows:  “ . . .and where those two parts meet is where I am whole again.”   Brame’s illustrations and Jenning’s action-packed in-flight conclusion are further evidence of Choma’s strength and wholeness.

As John Jennings explained by zoom and in an earlier interview, After the Rain is the first volume in a new line of graphic works published by the Abrams compnay.  This Megascope imprint is dedicated to works by and about people of color, with a heavy emphasis on science fiction and fantasy.   In addition to those forthcoming graphic novels, I am looking forward to its graphic 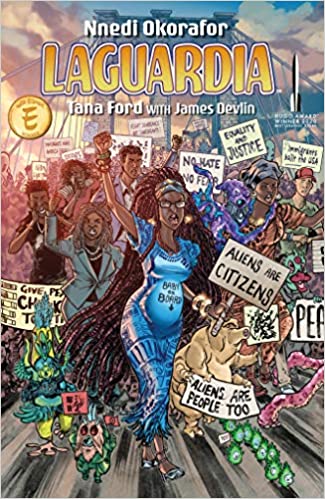 history book for readers 12 on up about the 1921 Tulsa, Oklahoma race massacre.  Across the Tracks: Remembering Greenwood, Black Wall Street, and the Tulsa Race Massacre will be published in May, 2021.

Nnedi Okorafor has herself written some comics for teens and adults, while her all-prose works rooted in Nigerian culture include the science fiction Binti trilogy for teens and a contemporary mystery for tweens titled Ikenga.  I had the pleasure several years ago of hearing Okorafor speak in person about her life and work, when she was an invited, honored guest at the University of Minnesota.   Perhaps this online interview, with its embedded link to a TED talk she has given, may substitute for that sort of still locked-down “behind the book scene” experience.