In War and Peace

Posted on February 1, 2018 by rosinskynatalie

What happens when peacetime resembles war?  I will be pondering this question in coming weeks as we celebrate Black History Month, also known as African-American History Month here in the U.S.A.

This year there will be a special focus on the experiences of Black combatants in wartime and its aftermath.  The centennial of World War I (1914 – 1918), once optimistically called “the War to End All Wars,” has spurred this focus.  Certainly, explosive graphic novels such as The Harlem Hellfighters (2014)  (discussed by me here in a

2014 omnibus review of graphic literature about World War I) call dramatic attention to how U.S. discrimination against Blacks followed them onto the battlefields of France.  This work follows members of the all-Black 369th Battalion—real-life members and some fictionalized amalgams—before, during, and after the Army service for which they had volunteered.  A short video interview  of the novel’s author Max Brooks, showing documentary footage of the events he and illustrator Caanan White vividly bring to life in their book, is well worth seeing.

I was pleased to learn, while updating my 2014 review, that in 2015 Sergeant Henry Johnson, one of the Hellfighters, was finally posthumously awarded the Congressional Medal of Honor for his heroism.  France had 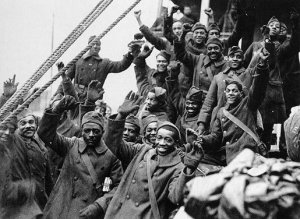 acknowledged Johnson’s bravery with its Croix de Guerre, its highest military honor, back in 1919.  I was also interested to learn that Hollywood star Will Smith is again planning to produce a dramatized version of the Hellfighters’ saga, this time working with TV’s History Channel.  In 2014 Smith had previously  optioned Brooks’ book for a movie version, a failed plan.

Similarly, just as World War I did not “end” all future conflicts, President Woodrow Wilson’s promise that winning the war would make the world “safe for democracy” was broken many times—particularly for Black soldiers who fought in that war and their descendants.  One has only, in some instances, to look out the window or

watch the news on TV or Facebook to see how wartime violence—with armed, uniformed officers often pitted against unarmed civilians—has become commonplace in today’s so-called peacetime.  Too often, these incidents feature White officials firing upon Black citizens, a reflection of U.S. society’s ongoing racism.  Today I spotlight an amazing new graphic novel that powerfully epitomizes and gives context to this epidemic of violence: I Am Alfonso Jones (2017), written by Tony Medina and illustrated by Stacey Robinson and John Jennings.  Their book also shows how and why the Black Lives Matter movement is a response to this epidemic.

Early in the novel, fifteen-year old Alfonso Jones—bright, funny, loving, and hard-working—is shot to death in a mid-town Manhattan department store.  The White off-duty police officer moonlighting there as a security guard says he thought the coat hanger Alfonso was holding was a pointed gun!  Pictures by illustration

partners Robinson and Jennings show how such a mistake was visually impossible, while Medina’s insightful commentary explains how the officer’s stunted, racist outlook provoked him to a fatal, kneejerk reaction.   Believing all Black teens are dangerous, that Blacks are inferior “savages,” and hearing from another customer that there is a Black man with a gun, Officer Whitson in a fearful instant slays Alfonso.  This senseless tragedy could have been avoided.  As the boy’s grieving mother eloquently says, if Whitson’s schooling and “broader reality. . . movies, TV, whatever. . .”  had been different. . . “maybe he would have seen my son as a teenager, as a person, as a citizen, as an American, as a human. . . .”

Medina, an award-winning author, creates such believable teen-age characters that Alfonso’s death, after only thirty pages, is profoundly moving and disturbing.  We see the humor and energy, the nervousness and affection that Alfonso brings to his bike messenger job, his school activities, and his crush on classmate Danetta even as he asks her to go with him to buy his first real suit.  There, while he is trying

on coats for her, his life’s hopes end in a volley of bullets!   But that is not where the novel ends.  For another 130 pages, we follow the Harlem teen’s journey as a ghost—on an intangible subway train joining the spirits of  other, real-life Black victims of senseless violence.  Mrs. Eleanor Bumpurs, Amadou Diallo, Michael Stewart, Anthony Baez, and Henry Dumas were each slain in different recent decades in New York City history.  Now, as fictional characters, they join Alfonso to journey back and forward in time and place, visiting past injustices and following along as Alfonso’s friends, family, and community grieve and protest his death.

This narrative framework—potentially unbelievable and melodramatic—remains grounded in human warmth and loss.   Medina’s wise words and savvy characterization and Robinson and Johnson’s powerful images keep the book real.  Ghost Alfonso responds with bewilderment and anger to his death and then poignantly returns to typical teen-age responses as he observes life going on without him.  We see through his envious eyes a school production of “Hamlet” he had hoped to join which now features a former rival. Instead of a traditional production, it is now a hip-hop version.  Shakespeare’s “to be or not be” is retold in the rhythms of “What is a life/What is a lie/When your dis-ease/Causes another to die?”  There, as elsewhere in the novel, animated facial features and gesturing, fluid figures enhance the written word. 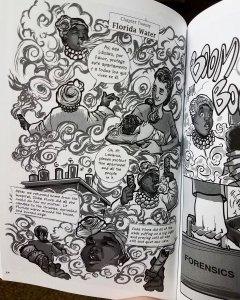 Entirely wordless pages also advance the story here.  As the book opens, before we really know who Alfonso is, we silently witness the first bullet to strike the teen.  We are “hooked” by this two page sequence, paced so deftly by Robinson and Jennings with techniques they then use throughout the book.  They move deftly between long distance and close-up views, breaking panel frames to great effect and sometimes eliminating panels altogether to create a sense of motion or time.  I Am Alfonso Jones deserves the many accolades it has already garnered from writers, graphic artists, and reviewers.   It is, I feel, a sure contender for awards in the coming year.   A teachers’ guide to the novel is also available at its publisher’s website.

What else will I be reading or rereading this coming Black History month?  Once I stop feeling devastated by I Am Alfonso Jones, I might

catch up with the all-prose looks at unwarranted White police  violence in All-American Boys (2015) by Jason Reynolds and Brendan Kiely or The Hate U Give (2017) by Angie Thomas. (A movie adaptation of that best-seller will reach theaters later this year.)  I have already read and can recommend Kekla Magoon’s How It Went Down (2015), dealing with similar issues.

First, though, the stand-out visual storytelling in Alfonso will have me catching up with the graphic novel adaptation of one of my favorite contemporary classics, Octavia Butler’s Kindred (1979; 1988; 2004).  That haunting, award-winning novel about time travel to the slave-holding American South, illustrated by Alfonso’s John Jennings and adapted by Damian Duffy, just last year became an acclaimed best-seller as Kindred: A Graphic Novel Adaptation (2017).   Both versions depict the cruel, warlike violence typical in the supposedly peaceful South.