Posted on January 1, 2018 by rosinskynatalie

These words from a Tennyson poem are one traditional New Year’s refrain—but they are just wishful thinking this January 1.  For many of us, taxed by President Trump’s gross misstatements as well as his policies, it may well be November 6, 2020 before we can officially “ring out the false, ring in the true.”  But I believe that persistence between now and then is itself worth some celebratory bell-ringing, that there can be as much value in continuity as there is in change.  Reading a recently published chapter book, The River Bank: A Sequel to The Wind in the Willows (2017), foregrounded this idea for me.  Today I look at this charming illustrated work along with some comic book series, all for upper-elementary age and older readers.

I myself truly appreciated The Wind in the Willows only as an adult, with an adult son, as I have explained here.   Johnson, however, appreciated it as a child.  During her Iowa girlhood, as she recently said, Johnson imagined what female characters

might have done had they existed in some of the literary classics she loved.  The Far Bank and similar rewritten classics, she adds, “build a story that opens up the ignored, forgotten, or blocked-off passageways in the original.  It’s a mark of our affection for a work that we labor so hard to understand and, perhaps, to redeem it.”   Johnson’s pitch-perfect recreation of Kenneth Grahame’s poetic, high-flown language is one of the marvels of this sequel, which may be enjoyed on its own, without ever having read The Wind in the Willows.  But readers will experience more joy and meaning from such luminous phrases as “an animal lives in the long now of the world” if they have already read Grahame’s work.  I suspect that young readers who pick up Johnson’s book first will make their way soon to the original. 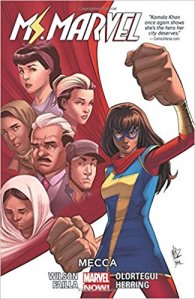 So, in a new year valuing continuity as well as change, I will point out the welcome, continued publication of comic book series with racially and culturally diverse heroines and heroes.  Kamala Khan, the Pakistani-American, Muslim Ms. Marvel, reviewed here , here, and here, had Volume 8: Mecca (2017) just published on December 27—in time for new year’s reading!  Volume 9 is scheduled for publication in July, 2018.  Lunella Lafayatte, the African-American pre-teen Moon Girl, reviewed here, has since appeared in Moon Girl and Devil Dinosaur, Volume 3

(2017).  Volume 4 will be published in a few weeks and Volume 5 is set for July, 2018 publication.  Other characters in that Marvel comic book universe have called nine-year old, science-loving Lunella “one of the smartest people” in their world!  While its sales figures are not super high, a troubling trend, devoted fans of this comic book series are discussing ways it would make a great animated film or TV show.  Miles Morales, the Afro-Latino American Spiderman, also continues to be published, appearing in his own series and as a side character in other related titles. 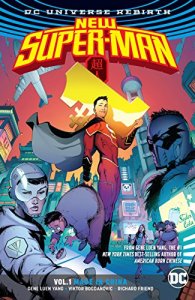 Graphic novel luminary Gene Luen Yang also continues to bring his talents to the inventive continuation of comic book heroes.  This congressionally-appointed National Ambassador for Children’s literature, working with Malaysian illustrator Sonny Liew,  first reclaimed and reinvented a minor 1940s comics figure  in the graphic novel The Shadow Hero (2016), reviewed here  and here.  This book pays tribute to the Chinese-American author’s background.  Now he is reinventing Superman!  Yang was first invited by DC Comics in 2014 to write a series about the traditional version of this iconic character.  This led to a nine-issue series (#41-50), illustrated by John Romita, in which Superman has lost many of his powers and his Clark Kent identity is no longer secret.    But it is Gene Yang’s more recent, ongoing creation of an alternate universe Superman in the New Super-Man series that I find inspirational.  In these years in which our president asserts that the U.S. is better off having less global involvement and fewer immigrants, Yang’s Superman is a Chinese teenager living in Shanghai! 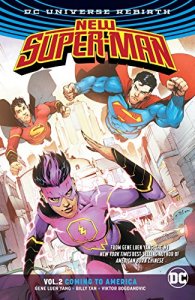 Seventeen year old Kong Kenan is thrilled to receive Clark Kent’s superpowers.  He and all his acquaintances know all about those powers and other U.S. A. superheroes because, as Kenan remarks, “Everybody knows who Superman is.” Today we live in a globalized world, as is evident in the trans-national advertising, clothes, and activities in illustrator Viktor Bogdanovic’s detailed depiction of cosmopolitan Shanghai, a Chinese commercial hub.  This fusion of cultures is also evident in inker Richard Friend’s  lettering, which is color-coded to show how English is incorporated into the everyday speech of China.  We learn that characters’ black-lettered words here stand in for their Mandarin language, while the light-blue words are English words and phrases now current in China.

and more thoughtful person, even as he deals with the political and physical battles linked to his new superpowers.  As a member of the new “Justice League of China,” Kenan becomes friends with its teenaged Bat Man, Wonder Woman, and female Flash only when he learns to control his verbal jabs as well as his impulsive actions.  As Kenan thinks to himself, “A numb lip is the price of friendship.”  Writer Yang’s dialogue here is fresh and fun—with fast retorts and interplay among the teens, with the slightly-older reporter Lan Laney (the Lois Lane of this series), and between the young superheroes and two sets of apparent supervillains.    We also wonder about the true motives of the government official, Dr. Omen, in charge of the League and about who is behind the mask of one head villain, Flying Dragon General.  How bad can he really be if he at one point saves Kenan and also often talks about “Truth, Justice, and Democracy”. . . the same words we have heard Kenan’s working class father say?  That mystery, and the mystery of Kenan’s mother’s possibly accidental death are subplots throughout these volumes.

Kenan’s difficult relationship with these authority figures extends to another one, Master I-Ching, the martial artist whose wisdom includes lessons about how to control and use superpowers.  Here author Yang brings in another China-specific

but also global element.  This teacher’s name refers to the Chinese classic Book of Changes, the I Ching, known and used world-wide as a mystical way to guide daily life and also see into the future.  Master I-Ching explains this system’s use of trigrams, an eightfold series of three lines in the shape of an octagon.  Careful readers will see that such octagons are also part of the symbols on costumes worn by the Justice League of China. In visuals as well as story lines, the New Super-Man comics being authored by Gene Luen Yang incorporate some diverse traditions which now unite people around the world.  I look forward to the June, 2018 publication of New Super-Man Volume 3: Equilibrium, collecting issues 13 through just issued #18 of this series.

Will the nationalistic anti-globalism of Donald Trump have a negative effect on the continued existence or growth of diverse and multi-cultural superheroes?  A market-place opinion piece just the other week raised this specter.  Yet I believe along with others that the audience for these well-written works, in which diversity is not merely cosmetic but is integral to the story and art, remains strong.  I am also heartened to see that issue 21 of the New Super-Man is already scheduled for publication in March, 2018.  It bodes well for the new year–particularly if parents, librarians, and teens continue to buy and order these works.

Happy 2018!  Enjoy our intriguing new superheroes and the new–as well as the original–versions of our literary classics.  We have a lot to celebrate and maintain, even as we work for change.