The Wind in the Willows, Two Sons, and Four Lads

Posted on May 6, 2014 by natalierosinsky

As thoughts cascade through my mind, I see two sons tumbling together, breaking apart into four lads. I hear a staccato song fading into the murmur of wind in the willows . . . . 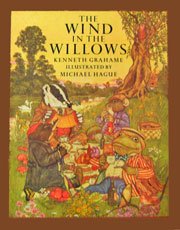 Today is my son’s 25th birthday—he has now lived five years longer than Alistair Grahame, the only child of Kenneth Grahame, the English author who gifted the world in 1908 with The Wind in the Willows. My library book club discussed that classic of children’s literature earlier this week. We learned that the heart of Grahame’s book had been stories he told to young Alistair, who was nicknamed Mouse. Grahame later expanded these tales of shy Mole, resourceful Ratty, practical Badger, and boastful Toad in letters to his son. Yet Alistair himself—unlike Mole—rarely “entered into the joy of running water” or “caught . . . something of what the wind went whispering so constantly . . . .” While he and his nanny wrote their own accounts of life in the country, titled The Merry Thought, Alistair also threw frequent tantrums. Reports from Alistair’s first schools suggested that the boy often was most like loud, thoughtlessly destructive Toad!

Kenneth Grahame’s biographers Peter Greene and Alison Prince reveal that the author and his wife Elspeth never accepted their son’s partial blindness. He had been born with almost no vision in one eye and limited sight in the other. Still, his parents sent Alistair to boarding schools, expecting him to earn excellent grades and get along with boys passionate about team sports. Their expectations added to Alistair’s physical problems. In 1920, two days before his twentieth birthday, Alistair Graham took his own life. He had staged his death on nearby railroad tracks, leaving only a headless torso.

Our reading group was horrified by this bloody image. It confounds a cliché: surely to
outlive a child’s suicide is a parent’s worst nightmare. Contemplating the Grahames’ anguish of probable regrets and unending questions, I am not surprised that after Alistair’s death they sold their family home and lived abroad for four years. When they returned to England, they settled in a different riverside community. Kenneth Grahame would write almost nothing for publication until his death in 1932.

Ironically, The Wind in the Willows has far outlasted what would have been Alistair Grahame’s natural lifetime. It has even been reincarnated in staged dramas, a Broadway musical, and several British TV and radio series. Its filmed versions range from a Disney cartoon to stop motion animations and movies in which human actors (including the entire antic crew of Monty Python) play the woodland creatures. Author William Horwood in the 1990s wrote four sequels to Grahame’s classic, while another British author, Jan Needle, has retold it from the working-class viewpoint of the novel’s villains, with Baxter Ferret as the hero! The Wind in the Willows has also inspired musicians. Dutch composer Johan de Meij created a four-movement classical piece based on it; Van Morrison wrote and sang the haunting “Piper at the Gates of Dawn,” rooted in the book’s central chapter of the same name. Yet it is another, lighter musical piece that has echoed for me these last days, as I contemplate the choices of grown sons.

When Ratty encounters the restless Sea Rat, who speaks so enchantingly of his many voyages to distant ports, it is Sea Rat’s foreign birthplace that claims my attention: “ancient and glorious . . . Constantinople.” For that is the exotic location, halfway around the globe, where my own son lives. Once ancient Byzantium, Constantinople was renamed Istanbul in 1930 by Turkey’s charismatic leader Mustapha Kemal Ataturk. The lure of this cosmopolitan port c
ity has proven stronger for my son than the “caressing appeals . . . those invisible little hands pulling and tugging” one home. No Mole he, to long for familiar sights and sounds . . . or even his fond parents.

And so I tap my feet to the syncopated rhythms of “Istanbul (not Constantinople),” that snappy tune first recorded in the 1950s by The Four Lads. Their pop musings about the absurdity of geopolitics, of what outlasts and transcends renamings, remind me to be grateful for my confident, bold son. However much I sometimes wish he were closer to my home, he is making his own way, figuring out where his own home may be. Unlike Alistair Grahame, he has not been devastated by difficulties encountered in the Wild Wood or the larger Wide World. My son heeds those quiet places inside and outside of himself, remaining so-to-speak attuned to the murmur of wind in the willows. Whenever I have doubts or feel discouraged by his distance, I count it a good omen that the most recent singing group to record “Istanbul (Not Constantinople)” is the self-proclaimed They Might be Giants.