Posted on May 6, 2014 by natalierosinsky 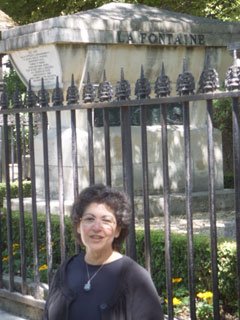 I came for the celebrities but stayed for the unknown people surrounding them.

According to one popular travel guide book, Pere Lachaise cemetery is “the grandest address in Paris.”  Its 118 acres, which make it the largest cemetery within city limits, hold the remains of renowned artists, musicians, inventors, political leaders, and—yes—writers. When Napoleon established Pere Lachaise in 1804, he “jumpstarted” the then-remote graveyard as an international tourist site by moving the bodies of 17th century playwright Molière and fable writer La Fontaine there. They rest next to each other in raised sarcophagi.  Two centuries later, guidebooks and websites list the names and locations of hundreds of luminaries who repose at Pere Lachaise. Thousands of tourists now  flock there each year to view the final resting places of great French writers like Proust and Colette, Guatemalan Nobel Laureate Miguel Asturias, and Anglo-Irish Oscar Wilde.  American writer Gertrude Stein and her beloved Alice B. Toklas share one tombstone, while the ashes of Native Son’s author, Richard Wright, are marked by a simple marble plaque in the walls of the cemetery’s massive columbarium.  La Fontaine’s sarcophagus is decorated with a bronze frieze of animals from his many fables, but I was disappointed that no pachyderms paraded across the tombstone for Jean de Brunhoff, creator of Babar the Elephant.

Pere Lachaise is located in the 20th arrondisement, or district, of Paris. This northeastern sector of the city now houses recent immigrants—many from Africa and Asia. The studio apartment my husband and I rented last month in this slightly shabby family neighborhood was around the corner from a street lined with Turkish kebab shops, Chinese noodle restaurants, and Islamic discount clothing stores. I joked that we could afford to vacation in a Paris neighborhood where celebrities were buried but not in the city center where many of them once lived!  Yet we relished our weeklong stay. Exploring the markets, bakeries, and cafés of this bustling area was as satisfying in its way as finally seeing first-hand art masterpieces and Paris landmarks. So of course we had to tour Pere Lachaise cemetery, not initially high on our list of landmarks, since it was just a five-minute walk from our vacation home. . . .

The distance between everyday life and celebrity, measured in mere steps as we left cracked city pavement to enter the dirt paths of this cemetery, may also be calculated in the vast numbers that often separate fame from fortune. Pere Lachaise houses official war monuments to the many people who have fought and died for France. The cemetery also has separate, wrenching monuments dedicated to the thousands who were killed in Nazi concentration camps.  Instead of victims’ names, these memorials are engraved starkly with now heinous place names: Buchenwald, Auschwitz, Ravensbruck. Heartrending as these monuments are, though, I found myself even more moved by the voices of individual and family loss carved alongside names unremarked by history. 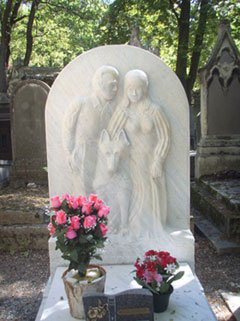 A couple memorialized with their dog. Photo credit: Don Larsson

Fourteen year-old Sophie, whose “beauty, goodness, and charm” delighted all who knew her, was sadly missed and would never be forgotten by her parents. That time and weather had begun to wear away these words, cast in stone in 1830, enhanced rather than lessened their poignancy.  The couple who had commissioned an Art Deco monument depicting them with their dog won my heart, too. Though I no longer recall their undistinguished family name, I shall not forget that striking image of affection and its insight into the life of one family. I wonder now about the other, untold stories buried beneath the crowded monuments—some tended lovingly, others crumbling into ruins—in this venerable cemetery.

Neil Gaiman recently used his considerable talents as he conjured comparable British characters, remarkable for their individuality rather than their achievements, in The Graveyard Book he wrote especially for young readers. Gaiman breathed the life right back into those “ghosts”! And perhaps that is an inspiring lesson I shall take away from my ramblings through Pere Lachaise, itself the setting for another modern fantasy novel, Bill Richardson’s delightful Waiting for Gertrude. As Richardson has one of the denizens there (his version of Frederic Chopin, to be precise, now reincarnated as a cat!) observe: cemeteries at night are places where we create “a unity between two worlds, between the tangible and the imagined.” Or, as I would put it, all cats—along with people—may be artists in the dark.  Confronting grave matters is a reminder of ordinary life’s potential as well as its losses.