Posted on January 1, 2015 by rosinskynatalie

New Year’s resolutions—many of us make them, but fewer manage to keep them!  It’s not surprising, then, that comics fans and media outlets   have poked fun at this tradition itself or at current events by imagining the New Year’s resolutions of classic superheroes.  Since my husband is soon to retire, I like Mark Engbom’s take (on the right) on one of Superman’s resolutions.  But 2015 is ringing in new superheroes, with their own takes on New Year’s resolutions and their own, new-to-comics issues to resolve.  It gives me pleasure to start 2015 by reviewing two warm, wise-hearted, and good-natured comics compilations.  I think readers tween and up will very much enjoy, sometimes smiling in rueful or surprised recognition, Faith Erin Hicks’ The Adventures of Superhero Girl (2013) and Ms. Marvel: No Normal (2014), written by G. Willow Wilson and illustrated by Adrian Alphonsa.

The Adventures of Superhero Girl originally appeared as a weekly, black-and-white comic strip in a Canadian newspaper, the Halifax Coast.  Its publication there explains the episodic nature of Superhero Girl’s adventures, many of them complete on one page, while others spread out to three to five pages (about a month in publication time).  Author/illustrator Hicks eventually put the comic strip online.  Collected in this volume by Dark Horse Press, Hicks’ tales about her college-aged hero appear here brightly colored by Chris Peters, whose addition of dotted backgrounds is an affectionate tribute to old-fashioned, pixilated comics.

Superhero Girl is not your “typical” superhero—and that is the cause of much of her problems.  In low-crime, small-city Canada, people even tell her that her costume is not superhero-worthy and that her powers are not as awesome as they expected.  Some of her feats and good deeds are even ignored by those she helps.  This leads to feelings of low self-esteem, compounded by having an older brother who is the shining model of a superhero, with his own action figures and adoring fans.  As comics veteran Kurt Busiek points out in his introduction to this book, “Superhero Girl is about life . . . about being a younger sister, about being a broke roommate, about needing a job . . . getting sick, feeling out of place at parties . . . all wrapped up in the package of being a young superhero . . . .”

We can empathize with this masked heroine, lounging in sweat pants and sweater, as she reads her New Year’s resolutions to a bored-looking roommate.  At the same time, Hicks also leads us to gently laugh at Superhero Girl, whose woes are always shown as absurd rather than seriously life-threatening.  Aiming for noble, high-toned language, she instead causes us to chuckle when she declares in one panel, “I resolve that if there is even one citizen cowering in fear before the spectre of crime, I will be the one to punch that spectre in the face!” and then adds in the next panel, mulling over this resolution “ . . . if it has a face. If not, I’ll punch it wherever.” Hicks’ cartoonlike drawing of facial expressions and use of cartoon techniques such as different bold typefaces and word balloon outlines for sound effects are further ways she emphasizes humor, rather than peril, in these adventures.  Dialogue that mocks stereotyped villains—for instance, the evil chief ninja’s shouting “CRIME!!  MUAHAHAHA!”—adds another layer of fantastic humor.

Having defeated such ridiculous villains as the “Marshmallow Menace” and “Bear with a Monocle,” Superhero Girl on the following New Year’s Eve is no longer making resolutions but rather downheartedly, somewhat grumpily “compiling end-of-the-year crime statistics.”  When her roommate convinces her to go to a holiday party, the hero’s life takes a turn for the better.  A reconciliation with her brother, a redeeming good deed done for a “dissed” acquaintance (and possible future boyfriend)  . . .  . These hopeful New Year’s episodes skip ahead next to a final, summertime adventure, its concluding panel showing a confident  Superhero Girl as she knocks out a talkative ninja “nemesis” with a  resounding “POW!”  I was not surprised to discover that Hicks first drew this down-to-earth, funny hero in a comics workshop she gave at an elementary school.  The Adventures of Supergirl Hero, even though it contains college-age concerns such as job-hunting and interviewing, is kid-friendly enough to have won the 2014 Eisner Award for Best Publication for Kids, Ages 12 to 14.

Marvel Comics, Incorporated has a history of “rebooting” its superheroes—placing new characters into the costumes and super-powered adventures that have already won fans.  Kamala Khan is the fourth “Ms. Marvel.”  She first appeared in 2013, in five comic book issues that have now been collected in one volume, titled Ms. Marvel: No Normal (2014).  Sixteen year-old Kamala does not make any New Year’s resolutions there, but if she did she would have two New Years to commemorate!  As a Muslim, Pakistani-American—the daughter of immigrants—Kamala might choose to acknowledge January 1, but she would also with her family and community be celebrating the Islamic New Year, Awal Muharram, based on Islam’s lunar calendar.

Such choices–involving multiple, sometimes conflicting obligations and desires—figure prominently in likeable Kamala’s life.  The Jersey City teenager, unlike most of her classmates, does not eat pork and is not permitted by her concerned parents to attend parties with boys.  Spirited, comics-loving Kamala chafes at these restrictions, thinking “Why am I stuck with all the weird holidays . . .  . Everybody else gets to be normal.”  After Kamala stumbles into an alien mist that gives her the superpower to elastically change size and appearance, her every day existence becomes even more unlike that mainstream “normal.”  Yet author G. Willow Wilson (herself a convert to Islam) and artist Adrian Alphona, along with colorist Ian Herring, do a sterling job of showing how Kamala’s religion and family inspire her superheroic efforts even as they sometimes crimp her teenage social life.  As Kamala notes, her father has always said that “people who rush in to help . . . are blessed.”  (In interviews, Wilson has explained how eloquent Sana Amanat, a Marvel editor, helped develop Ms. Marvel by sharing her own experiences as a Muslim growing up in New Jersey.) 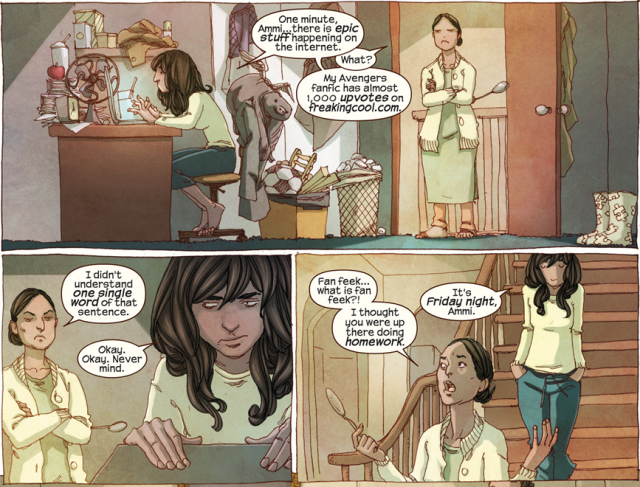 Ms. Marvel’s messages are fun-filled, though, not solemn lectures about being comfortable in one’s own skin or balancing cultural identity and family relationships.  Wilson and Alphona have Kamala figure out that being a brown, slightly-rounded teen is just as good as being a blonde, svelte heroine by discovering how uncomfortable a conventional, sexpot heroine’s costume is!  Its boots pinch and its swimsuit bottom rides uncomfortably high.  Kamala, the first Muslim-American superhero, adopts her more modest, skirted costume for practical as much as religious reasons.  This functional balance of goals with tradition is even indicated on the cover of Ms. Marvel, where the bare-armed teen carries not only standard high school text books but also a volume titled “Hadith [Islamic religious rules] for Life.”   Kamala continues to question the unequal restrictions placed upon her as a female within her family and mosque, but her Muslim classmate Nakia, a Turkish-American girl, is more accepting of these traditions. 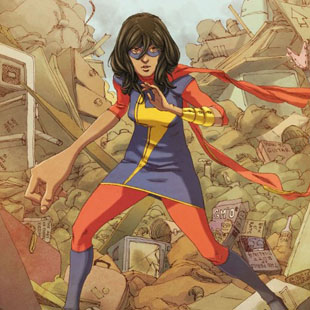 Artist Alphona’s shifts in perspective and use of close-up as well as mid and long-distance views add “punch” to Kamala’s heroic rescues.  The artist’s drawing of faces and figures also emphasizes the tenderness within Kamala’s family along with its loving tensions. Wilson’s word-perfect dialogue seamlessly blends with these images throughout the volume, culminating in its final panel.  Its tight-focus shot of Kamala’s mother’s arms, folded resolutely as she announces, “You’re grounded.” are shown next to Kamala’s stubborn, somewhat sullen face as the teen mutters, “Wanna bet . . . ?”  More adventures and conflicts are ahead of resolute Kamala—and we can hardly wait to see more of her and the individualized characters introduced in this volume.  Besides the mysterious, super villainous “Inventor,” there is Kamala’s slightly older, somewhat pompous brother; classmates and friends from varied backgrounds; and the supportive, non-Pakistani teen who has a crush on her.  Currently appearing in individual comic books, issues six through eleven of Ms. Marvel will be published as a book, Ms. Marvel: Next Generation, in March, 2015.  I will not be surprised if it joins the first volume on the New York Times best seller list.

Before that second volume appears, I shall try to catch up with G. Willow Wilson’s graphic novel Cairo (2007), illustrated by M.J. Perker, which was one of the ALA’s 2009 Top Ten Graphic Novels for Teens.  Also in my library queue is Wilson’s non-graphic novel Alif the Unseen (2012), named Best Novel of 2013 by the World Fantasy Association.  In addition, writing about new superheroes has further whetted my interest in older favorites.  Based on the fascinating excerpt I read this fall in The New Yorker magazine, I am also eager to read all of historian Jill Lepore’s The Secret History of Wonder Woman (2014), a family biography as well as cultural history.  Which to read first?  I resolve to answer that question this month!

1 Response to Resolutions: A New Year for New Superheroes