Posted on February 1, 2015 by rosinskynatalie 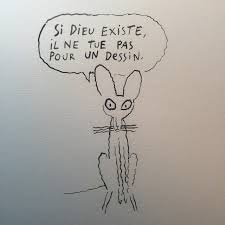 A skinny, big-eyed cat stands out among the responses cartoonists world-wide  drew to last month’s  terrorist attacks on the French magazine Charlie Hebdo and a kosher grocery store in Paris.  Sixteen people were slaughtered and others injured—all to honor those terrorists’ twisted understanding of their religion, Islam.  Charlie Hebdo had been singled out because of cartoons it published depicting Islam’s great prophet, Mohammed.  Jews, the grocery’s main customers, were targeted for their religion by the anti-Semitic terrorists. On the social medium Instagram, that tensely-posed cat proclaimed in French, “If God exists, He does not kill for a drawing.”

Why have a cat make this point?  French readers probably recognized this figure as no ordinary pet or stray but instead as “the rabbi’s cat,” a popular creation of successful, prolific French illustrator/author Joann Sfar.   Perhaps better known in North America as the creator of the kids’ graphic novel Little Vampire Goes to School (2003), a New York Times best seller (reprinted with new material in 2009 as Little Vampire), the illustrator of the popular kids’ Sardine series of space adventures (2006 to 2012), or as the illustrator of YALSA-lauded teen graphic novel The Professor’s Daughter (2007), Sfar has also created numerous graphic works that draw upon his Jewish heritage.  These include The Rabbi’s Cat (2005) and The Rabbi’s Cat 2 (2008), graphic novels that have won many European awards and in 2006 also won the Eisner Award for best U.S. edition of foreign material.  Sfar used material from both books when he co-created an animated film titled The Rabbi’s Cat (2011)  , which in 2012 won the Cesar Award (France’s equivalent of the Oscar) for best animated film. 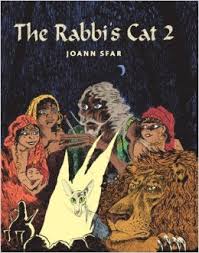 Set in 1930s Algiers, Paris, and—later—sub-Saharan Africa, all three Rabbi’s Cat works depict a colorful, complex world of relationships among people of different religions—a network of shared beliefs and values at odds with the deadly “us vs. them,” black-and-white views of today’s Islamic terrorists.  While Sfar also shows the religious intolerance sometimes manifested by Christians as well as Muslims (bitter seeds that would soon sprout in Nazi Germany) as well as the narrow-mindedness of some Jews, his overarching theme is how people may and should live peacefully together, regardless of religious difference.  Not naïve, Sfar also shows how European racism and class consciousness often have lumped Jews, Muslims, and all Black Africans together as supposedly inferior beings.  Yet engaging characters, amusing and exciting plots, and drawings aswirl with energy entertain readers (and viewers) so thoroughly that the important ‘messages’ in Sfar’s graphic works are a bonus, never heavy-handed.  Because some familiarity with different cultures and religious practices is assumed, and because there is some bloodshed and brief nudity shown, the Rabbi’s Cat books and film will be best enjoyed by those aged tween and up.

Self-centered and heedlessly playful, Sfar’s nameless cat is in many ways a typical feline.  In the first pages of The Rabbi’s Cat, we ‘overhear’ him thinking, “I never disturb [the rabbi] when he reads.” At that very instant, Sfar shows the cat sitting on the rabbi’s open book, his tail curving up against the middle-aged man’s nose.  The fun really begins, though, after the cat devours the household’s pet mynah bird.  Magically acquiring the bird’s ability to talk, the cat demands his right as a Jew to a bar mitzvah (confirmation ceremony)!  Having learned to read, it seems, alongside the rabbi’s adult daughter Zlabya, the cat is able to outtalk the rabbi and even gleefully out-reason the rabbi’s own spiritual counselor.  Here Sfar pokes fun at the pomposity and intellectual limits of some religious leaders even as he shows the strength and worth of less quantifiable love and affection.  Both the rabbi and his cat want the best for Zlabya, but neither is happy with the husband she chooses: a young French rabbi, who takes her back to Paris.  Experiences there test her father’s long held beliefs about the importance of religious rules governing daily life.  Meanwhile, lovely Zlabya copes with feeling out-of-place in cosmopolitan Paris, and the rabbi’s cat reluctantly makes friends with a street-wise dog. 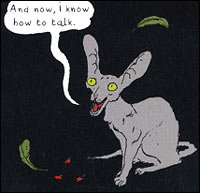 In depicting 1930s Algiers, Sfar has said he used stories told by his father’s family, who lived there for generations.  The close bonds between some Jews and Muslims there are reflected in Rabbi Sfar’s sharing that last name and a distant ancestor with his good friend, Sheik Sfar, a wandering Islamic musician and mystic. “Sfar” is a word in both Hebrew and Arabic.  Its different meanings (“to write” and “yellow”) are not important to the fellowship between the men, just as differences between Jews and Muslims are ironically not important to prejudiced Europeans, who disdain both groups.  In Algiers, a waiter at a fancy café haughtily tells the rabbi that “the establishment serves neither Arabs nor Jews,” while in Paris the rabbi’s musician nephew can only earn a living by pretending to be an Arab, singing popular, somewhat vulgar Arabic street songs. The impresario who hires him does not care that this entertainer is really Jewish, an expert in his own musical traditions. 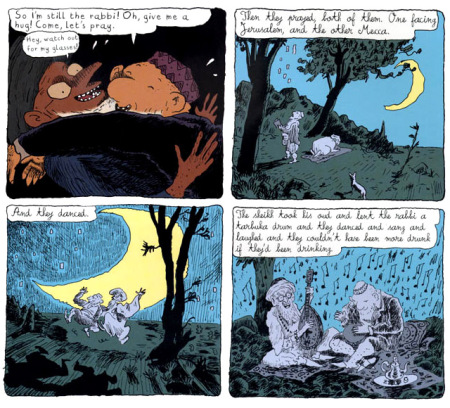 In both Rabbi’s Cat volumes, Sfar lovingly depicts North African architecture and seasides (so like his own ‘hometown,’ the French Mediterranean city of Nice). Colorist Brigitte Findakly deftly enhances Sfar’s work with vibrant, sunny colors that convey his locations’ hot days, with rich blues, purples, and greys suggesting   the cooler nights.  Throughout both volumes, Sfar’s sprightly drawing style—cartoonlike curves and exaggerated or minimalized features—conveys strong emotions and actions with bold, apparent ease.  Black silhouetted figures or faces and black backgrounds are also used to great effect in these works.

The Rabbi’s Cat 2 fleshes out some side characters from volume one and introduces intriguing new ones.  Malka of the Lions, a roguish, aging Jewish adventurer (and distant relative of the rabbi) and his pet lion (an old acquaintance of the cat) turn up just as Zlabaya and her husband, now back in Algiers, are in need of marriage counseling.  Two Russians—a Jewish artist and a former nobleman—who have fled Soviet Russia for very different reasons also appear here.  In the first half of this book, Sfar depicts how different customs (as well as languages) sometimes separate European Jews (Azhkenazim) from African or Middle Eastern ones (Sephardim), causing mistrust as well as humorous misunderstandings.  Ironically, such distinctions do not matter to anti-Semites.  The rabbi and his expanded circle, including Sheik Sfar, deal with Oran’s prejudiced mayor, himself a Catholic priest, who is inciting mob violence.  He proclaims, along with many vile and false things, that “France wasn’t built in the shadow of mosques and synagogues!”  Robust Malka fights back, while the rabbi finds greater comfort in retreat and study.  Observing his master among other pale, absorbed scholars, the rabbi’s cat ruefully notes, “People imbue you with such power, while you shiver at the slightest cold.  What strategies people come up with to hate you!”  Here the cat is clearly voicing a conclusion Sfar himself has made.

In the second half of this book, the travelling group continues to encounter bigotry.  A brief, insider’s joke about Belgian cartoon luminary Herge takes place when the entourage meets a boy reporter who looks just like his famous character, Tintin.  The lad is as ignorantly self-assured and convinced of Black inferiority as Tintin was in Herge’s early books.  But most of the group’s cross-continent adventures are more dramatic and serious.  Their uneasy stay with a tribe of Islamic extremists—despite Sheik Sfar’s best efforts—ends in bloodshed, with scimitars literally coated in dripping red, while a limited meeting with sub-Saharan Black Jews reveals that group’s unexpected prejudice against all Whites, even other Jews.  Here the Russian artist’s actions and words may along with the cat’s  ‘voice’  Sfar’s opinions.  The Jewish man has gone against multiple conventions to marry his Black, non-Jewish love.  To spare the gentle rabbi pain, the Russian also then lies about the existence of those Black Jewish bigots.  As this artist explains to his new wife in the book’s last panel, “Telling things like they are is not my job.”   Yet this statement is not merely a justification for lying.  It is rather, I think, a rationale for Sfar’s art.

Truths—about religious belief and practice, personal choices, political actions—are not simple.  There is no real way to tell them “like they are,” but their complexity may be suggested and sometimes even briefly captured by gifted words and images, such as the ones in The Rabbi’s Cat canon.  In this sense, in the face of recent brutal terrorism born of intolerance, these works by Joann Sfar offer us both caution and inspiration.  The recent history he embellishes reveals that we can be so much kinder to one another, however different our beliefs; however, they also suggest that we are capable of  even worse acts of violence and degredation—as other annals this past week, with its commemoration of International Holocaust Remembrance Day, confirm.

I know that having renewed my acquaintance with his sly, sometimes self-deluded but often wise feline I am eager to catch up with Sfar’s first film, Gainsbourg: A Heroic Life (2011, unrated), an impressionistic biography of Serg Gainsbourg, the so-called French (and Jewish) Bob Dylan.  I am also eagerly awaiting this spring’s publication in English of Sfar’s recent graphic novel, Pascin, a biography of the Jewish Modernist painter Pascin.  That highly social, bohemian artist’s life received one chapter in Ernest Hemingway’s memoir of 1920s Paris, A Moveable Feast.   I am certain that Sfar’s appetite for Pascin’s life and works will supply readers teen and up with further hearty fare.