Being Brave and Bold

Posted on April 1, 2018 by rosinskynatalie 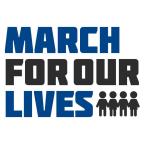 How do young people learn to be brave and bold?  I have been thinking about this since last week’s March for Our Lives, helmed by students protesting gun violence in schools and elsewhere.  The 800 or so demonstrations here in the U.S. and world-wide showed how connected, committed, and bold young people can be.   A movement born in reaction to the recent Parkland, Florida school shooting is now nation-wide and even transcends borders.  Such tragic events calling out for change may spur boldness.

Knowing about the success of past protests may also be inspirational.   There were shout-outs to the civil rights movement in several U.S. demonstrations last Saturday.  Speakers at the Washington, D.C. march included not only survivors of gun violence but the 9 year-old granddaughter of Dr. Martin Luther King, Yolanda Renee King.  Her own “dream . . . that this should be a gun-free world”  echoed Dr. King’s powerful words and vision.  In Atlanta, the civil rights hero Representative John Lewis spoke with authority when he told young demonstrators that, by never giving up or in, they were “going to have a victory.”   Some tweens and teens may have learned about Congressman Lewis and the civil rights movement through the award-winning graphic trilogy about his life, March, Books  1 -3  (2013 – 16), reviewed by me here and here. 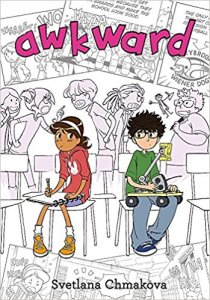 Yet such historical examples of bravery, perhaps introduced in school, are just one way kids learn to be brave.  More immediate and sometimes painful lessons happen through everyday life, which for most Western tweens and teens centers on school.  With this in mind, today I want to spotlight two graphic novels that I read recently, after eagerly looking at the American Library Association’s 2018 Great Graphic Novels for Teens list.  Brave (2017), written and illustrated by Canadian Svetlana Chmakova, was one of that list’s top ten books.  It is a spin-off of Chmakova’s earlier Awkward (2015), which in 2016 was also a YALSA top ten graphic novel.  Minor characters in Awkward become the protagonists in Brave, which can be read as a stand-alone novel.

In Awkward, we follow the (mis)adventures of Peppi Torres, the new girl at Berrybrook Middle School.  Through her first-person account, we see how this shy, sometimes physically-awkward pre-teen acquires genuine friendships as she deals with other students and cliques at school.  Art-loving Peppi is surprised to learn

how much she enjoys science, even though the Art Club kids are “at war” with the Science Club!  Peppi’s personal growth is accented by the one time that Awkward’s muted palette of mauve and soft browns or  blues effectively flares into vivid colors.  During a class trip to a science museum, as Peppi imagines herself visiting terrains around the globe, she “sees” them in bright greens, yellows, and shimmering white.  This color transformation parallels the strength of the friendship Peppi ultimately develops with equally shy Jaime, a science “nerd,” and the strong way she finally is able to literally shout down some bullies.

Yet Awkward is not a simple, linear work.  Its large cast of characters includes students and teachers of wide-ranging backgrounds and ethnicities.  With apt words and visual details, Chmakova gives us the attitudes and home lives of kids rich and 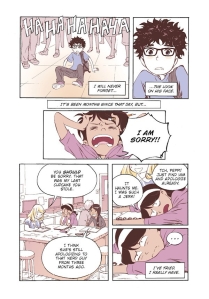 poor, of families which cope with disability and others which break apart due to self-centered anger.  We see teachers with lovable foibles and others with fearsome flair.  There are several subplots resolved in Awkward, even as we follow the main story about Peppi through the novel’s six chapters and 200 pages.  We see Peppi’s life over the course of several months, noting how her emotions trump ordinary clock time.  An anxious, sleepless night which feels endless occupies several pages, while the few minutes she spends nervously convincing the art and science clubs to work together to build an indoor planetarium feel  like “SEVERAL CENTURIES LATER.”  The planetarium is a success, returning both groups to officially approved school status.  Peppi learns to be brave by working with others in such efforts as well as speaking out by herself.   Or, as Peppi herself concludes, “BUILD THINGS.  BUILD FRIENDSHIPS. BUILD YOURSELF.”

In Brave, Chmakova continues to use capital letters and different fonts for 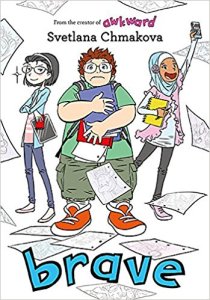 emphasis as well as to indicate actual changes in spoken volume.  Readers of both works will also note their similar, manga-inspired visual style, since both feature faces and some actions drawn unrealistically.  Chmakova’s earlier success as creator of manga  for publishers Tokyopop and Yen Press is evident in her depiction of  impossibly wide frowns and smiles, surprised eyes with pinpoint or no pupils, and doubling of arms and legs to indicate motion.  These techniques will delight lovers of manga and be accessible to other readers as this style so cleverly supports each work’s rich storyline and characterization.

overweight boy, fixated on potential disasters caused by sunspots, was a minor character in Awkward, a member of the middle school Art Club.  In Brave, we see how Jensen is physically bullied and teased about his weight, obsessions, and trouble with math, even as some students he considers friends ignore him or make slyly mean jokes at his expense.  Jensen’s visualizing his school day as a video game, with a series of leveled obstacles to overcome, is both sad and funny!  Pages or panels depicting this game and Jensen’s comforting daydreams are the points at which Awkward’s subdued palette adds some brighter colors. 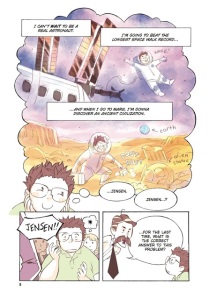 himself are major points in the novel.  Its nuanced characterizations also have his thoughtless friends learning to recognize and change their verbal bullying, while one of the two physical bullies also begins to change.  These subplots enrich the 10 chapter novel, which also sees outer-space obsessed Jensen coming to appreciate school athletes, two of whom befriend and stand up for him.  As Jensen says to himself, “I guess sports are . . . kinda like their Star Trek.”   Such natural sounding thoughts and dialogue are one of the ways Chmakova  brings her many characters to life.

These characters include newspaper editors Jenny and Akilah, longtime friends first introduced in Awkward.  Here, working on the school’s news video blog, the girls learn to acknowledge and overcome their different attitudes towards risk and anger.  Jenny has a hair-trigger temper, but she is more afraid of offending school authorities than mild-mannered, hajib-wearing Akilah.  Such richly-drawn figures and relationships are a fine, engaging substitute for the “tutoring for middle school life” that at one point is beleaguered Jensen’s wish.

Svetlana Chmakova’s perceptive insights and engaging characters make us eager to read the illustrated autobiographical pieces at the end of each book.  She provides relevant details about her life in Russia and as a 15 year-old immigrant to Canada, as well as—in Brave—reassuring scientific facts about sunspots!  I believe readers will be happy to learn that a third volume about Berrybrook Middle School’s students, titled Crush,  will be published in October, 2018.

Before then, fans of Awkward and Brave who like spooky stories might want to check out the manga listed at Chmalkova’s website.  (I myself will be requesting the

first volume of Night School from the local library.)  Kids wanting to know more about 1960s civil rights battles would find The Silence of Our Friends, a graphic novel reviewed by me here, rewarding.  I am Alfonso Jones, highlighted here, is a stunning, gut-wrenching graphic novel linked to today’s Black Lives Matter movement.  And, for those brave and bold young people who choose to unite in protest, the Comic Book Legal Defense Fund has produced Be Heard!,  a a short comic detailing student protesters’ rights and suggested best practices.