And the Winner Is

Posted on March 1, 2020 by rosinskynatalie 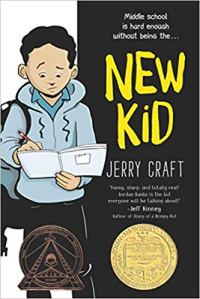 What a thrill!  Jerry Craft’s graphic novel New Kid (2019) recently won the prestigious 2019 Newbery Medal for the year’s “most distinguished contribution to children’s literature.”  With this award, the American Library Association placed graphic literature fully in the mainstream of children’s literature, a view some of us readers already held.  (I had reviewed Craft’s novel about middle schoolers earlier, also referring to it here.)  But the ALA awards review is not the only yearly major spotlight turned on graphic works for young readers.  Having just last month watched the 92nd annual 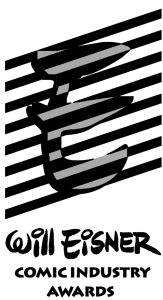 Academy Awards ceremony, I wanted to bring the “Oscars of the comics world”—the Eisner Awards—to your attention.  These awards are named in honor of comics luminary Will Eisner, the U.S. author/illustrator often credited with coining the term “graphic novel” for his longer works.  (His fans world-wide have begun a tradition of honoring Eisner every first week in March.  That is right now!)   The Eisners have many award categories, including three specifically for kid lit.  So today I take a look at relevant winners of the 2019 Eisner Awards, announced in 2020, with works appealing to a range of young readers as well as us charmed adults.

Author/illustrator Jen Wang won double recognition in these awards.  Los Angeles-based Wang was declared 2019’s “Best Writer/Artist,” with her graphic novel The Prince and the Dressmaker (2018) chosen as the Eisners’ “Best Publication for Teens” ages 13-17.   If you have not already read this twelve chapter, full color work, 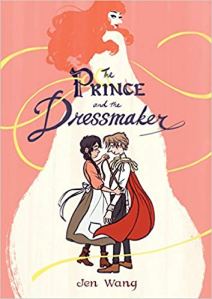 you are in for a treat!  Wang’s Cinderella-like tale follows young dressmaker Frances’ transformation into a couturier, achieving her heart’s desire by aiding 16-year old Prince Sebastian fulfill his own hidden wish to dress in gorgeous, elaborate women’s garb.  The cartoon-like features of the pair collaborating in this Belle Epoque adventure capture a full range of emotions—surprise, elation, despair, bewilderment, and finally joy.  In an interview, Wang described Sebastian as “genderqueer,” but said readers might also interpret him as trans or as a “cis” male crossdresser.  Certainly, a fairy-tale romance between Frances and Sebastian blossoms at the book’s end.  Astutely, Wang realized that questioning gender identity and one’s roles in life are especially compelling issues for teens.  She describes and shows in the novel’s  “Process Notes” how she changed her first drawings of Frances and Sebastian as adults into their teen-aged selves. 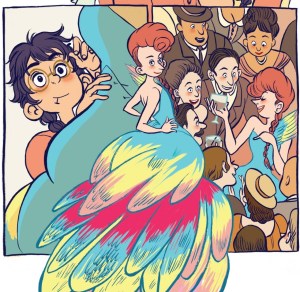 Wang makes extensive, effective use of non-verbal storytelling, with wordless double and multiple-page episodes.  In these scenes, alternating close-ups with mid and long-distance views and juxtaposing panels of different sizes on the page effectively convey actions ranging from mere seconds to hours.  For example, the stumble that Frances—wearing high heels—takes into veiled Sebastian, accidentally uncloaking his true identity, is told in this wordless way.  Later, Sebastian’s despairing moments as well as his and Frances’ final, triumphant reunion also are conveyed in wordless scenes. 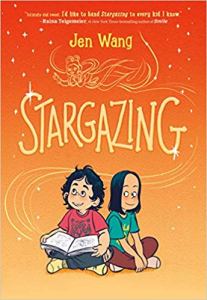 Such wordless storytelling is also key in Wang’s most recent graphic novel, Stargazing (2019), colored by Lark Pien.  This funny, touching story of middle-school friendship between two girls, the daughters of Chinese immigrants to America, is rooted in Wang’s personal experience.  She herself felt the pressure to succeed that one set of parents imposes on their daughter Christine, while—like her other main character, Moon—Wang as a child also had a brain tumor discovered and successfully removed.  But K-pop music was not as important to the author/illustrator as it is to the 13-year old characters in this ten chapter work!  These tunes feature at home as well as in the many middle-school scenes in the book. Music wafts visually across pages in the form of air-borne banners displaying song notes and lyrics.   Music is one link between the girls whose personalities are so different, one shy and the other outgoing.  Stargazing was published after the 2019 Eisner awards were announced.  These awards (as well as others given throughout the year) may help readers to spot such upcoming works by successful authors. 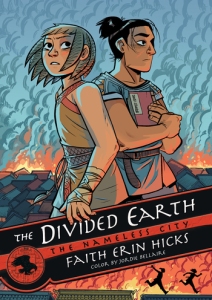 The Eisners may also prompt some book lovers to reread or catch up with past favorites.  This was my experience with author/illustrator Faith Erin Hicks’ The Divided Earth (2018), colored by Jordie Bellaire, which won the 2019 Eisner Award for “Best Publication for Kids (ages 9 – 12).”  The Divided Earth is the final volume in a trilogy I began reviewing here, with its first stellar volume, The Nameless City (2016).  This new Eisner spotlight reminded me to catch up with the middle book, The Stone Heart (The Nameless City #2, 2017) and then enjoy the conclusion of tween-age Kai and Rat’s adventures in The Divided Earth (The Nameless City, #3).  In this volume, the friends risk and 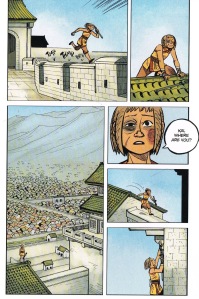 suffer much before they succeed, with adult help, in bringing a fair peace to the Nameless City.  Sound effect words in different shapes, sizes, and colors add “oomph” to the struggles and battles there.  These include individual combat as well as full-scale warfare. There is humor as well as tender emotion in parent-child reconciliations at the end of the book’s main action, as well as in the final, “three years later” reunion of now teen-aged, fully-grown Kai and Rat. I appreciated how this postscript shows the pair as friends within a larger city community, rather than as an inevitable romantic couple.

Lettering in different shapes and sizes is also important in Johnny Boo and the Ice Cream Computer (2018), winner of the 2019 Eisner Award for “Best Publication for 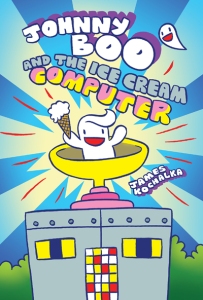 Early Readers (up to age 8).”  This is the 8th book in author/illustrator James Kochalka’s whimsical series about a ghost, beginning with Johnny Boo: The Best Little Ghost in the World! (2008). I was unfamiliar with these books until reading about this year’s Eisners.  I can see how Kolchaka’s fantastic “takes” on ghosts, silly monsters, and ice cream would appeal to some early readers, but I also know that some publishers, such as Toon Books, provide this audience with even more varied, serious fun.  Some Eisner Awards outside of these three “kid lit” ones may also be relevant for folks involved with young readers. 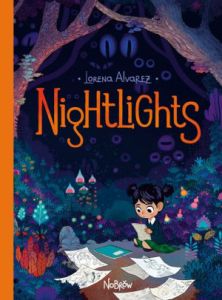 For example, this year’s award for “Most Promising Newcomer” went to author/illustrator Lorena Alvarez.  Her depiction of the imaginative, possibly supernatural experiences of a Latin American elementary-aged girl named Sandy are vividly captured in Nightlights (2018) and its sequel, Hicotea: A Nightlights Story (2019).  The dreamlike “ghost” in Nightlights is not as friendly as Johnny Boo, but Sandy’s strength is as memorable as her fear and creativity.  In Hicotea, Alvarez depicts Sandy’s perceptions of her school trip to a nearby wetland.  Readers elementary age and up will appreciate both the Catholic school snark and routines and the 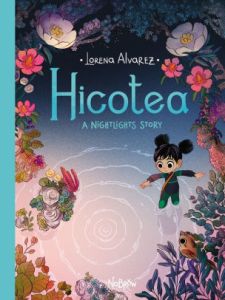 brightly colored, surreal images in these graphic works.  The illustrations are lush!  Another relevant Eisner award this year is the winner of “Best U.S. Edition of International Material,” Penelope Bagieu’s Brazen: Rebel Ladies Who Rocked the World (2018), a work best appreciated by readers tween on up.  I first reviewed Brazen here and am happy to spotlight it again during this official Women’s History month.  In addition, the 2019 “Best Painter/Mutimedia Artist (Interior Art) Award” went to Dustin Nguyen, for his achievement on Descender (2015-19).  This SF series, written by Jeff Lemire, features a boy robot in a brutal future.  In its collected volume format, Descender has already appeared on several “best graphic books for teens” lists. 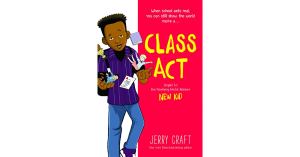 Looking ahead, finalists for the 2020 Eisner Awards will be announced in April. You might read some of these works to see how your predicted winners match up with the official ones, to be announced in July at California’s Comic-Con gathering.  Further exciting news: October will see the publication of Jerry Craft’s Class Act, the sequel to his Newbery Award winning New Kid.  Looking forward to Class Act makes me feel like a winner myself!