Posted on May 1, 2019 by rosinskynatalie

Private or public, some moments are seared into memory.  I thought of this last month as images of Notre Dame blazed in the news.  Its toppling spire also brought New York City’s falling Twin Towers to mind.  Those images from 2001  had flared up recently as well, when President Trump perfidiously linked the  devastating scenes  to his media attack on Ilhan Omar, a local U.S. Representative here.

There is another kind of indelible memory, that of personal experience which we share with others, usually most recognizable within our own species and culture.  Watching youngsters take their first wobbling steps, finding a mate, seeing how

elders age and die—these are some of those personal memories which, however unique within our own lives, resonate as experiences others undergo as well.  Today I look at two graphic works that illuminate these kinds of collective experience.  One is a nearly-wordless graphic novel, probably best appreciated by readers tween and up, that could also enjoyably engage and promote discussion with some younger readers.  The other is a stand-out  addition to a recent wave of graphic novels aimed at the middle-school crowd (but richly satisfying us older readers, too).

Through a Life (2018) uses bold images laced with subtle details to chart the birth through death experiences of its fictional main character.  We see Rodney, born in 1955 Alaska, grow step-by-step to adulthood, becoming a NASA astronaut and later, after a failed marriage, returning to age in his childhood home.  Nature in all its wonders is important throughout this character’s life.  French author/illustrator Tom Haugomat’s decision to create this work within the long tradition of wordless books is powerfully successful here, made even more memorable by his limited palette of colors.   The repetition of red, teal,  beige, white, and black captures the eye and is a unifying narrative thread.

Color is the most obvious link throughout this evocative work, where the only words are place names and dates on the bottom of most left-side pages.  These pinpoint places and times in Rodney’s life, beginning right before he is born.  It takes a few pages before one realizes that the right-hand page in these pairs is what Rodney in the left-hand scene is himself viewing!  Thus, we entertainingly get this child’s view through windows, a fence, a microscope, and even a mid-twentieth century View-Master toy.  (In an interview, Haugomat has described how much he himself enjoyed this

popular device.)   Later, we observe what an adult Rodney views through TV screens, train windows, and computer screens, among other frames.  Each view is shaped according to the situation it reflects—circular, oblong, square, and so on.  The typicality of many events in Rodney’s life—the ways that they represent collective human moments—is enhanced by Haugomat’s omitting facial features in his stylized scenes.

The child Rodney does not always fully understand what he is seeing, and it is up to the reader to interpret such telling details as his father’s distraught hand gesture in a doctor’s office and a later snapshot, shown in a camera lens view, of his mother wearing a turban.  Her death by cancer is depicted silently several years later in a series of wordless scenes.  Unlike the shaped right-hand shots of less fraught 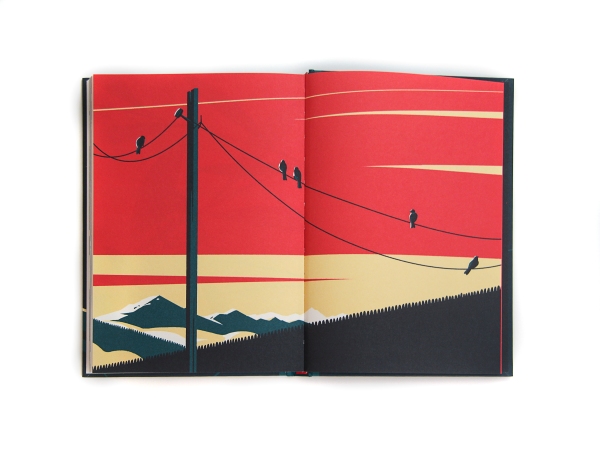 moments, centrally displayed on white pages, such highly-charged emotional or dramatic scenes are shown in full-page, double wide images, without worded dates or locations, in extended episodes covering six to twelve pages. In this way, Haugomat zooms into the church just before Rodney views his mother’s body; shows us how astronaut Rodney experiences being in outer space; depicts how Rodney as a NASA official observes (along with horrified spectators world-wide) the explosion of the Challenger shuttle craft; and, at the end of Rodney’s long life, even shows us how he perceives his final moments.   The careful viewer will note poignant parallels between the scenes Rodney observes as a child and those that draw his attention in old age.   These parallels, too, are often part of collective human experience.

In New Kid (2019), lauded author/illustrator Jerry Craft also details collective experience while spotlighting the specific problems his central character, seventh grader Jordan Banks, faces in his new school.  Many people experience awkwardness or uncertainty in new situations.  As we learn mid-book here, even Jordan’s grandfather has to undergo being (and being called) the “new kid” at his Senior Center when he moves to a different neighborhood.  Yet Jordan, a bright Black kid of modest means, has to cope with additional issues: the racial stereotypes about Blacks held by some teachers as well as students in  that private, expensive, and primarily white school.  His worried parents believe that cartoonist Jordan will gain more by using his scholarship there than he would from his first choice, an art school.  Craft uses sharp insights and humor to depict Jordan’s first year at “Riverdale Academy.”  In interviews Craft has revealed that he drew upon his own school experiences and those of his sons in creating this wise, engaging book.  (He and others also note that this school is set in the same fictional community as the Archie comics.)

Jordan has concerned, well-educated parents, yet he and the few other Black students at Riverdale frequently face stereotyped assumptions that they come from single parent or indifferent homes, enmeshed in poverty or crime.  Not every Black student there needs financial aid!  Alternatively, some students and teachers thoughtlessly ignore the possibility that not everyone enrolled at Riverdale can afford to travel widely.  Craft depicts these situations—along with the difficulties Jordan has in moving between his home neighborhood, friends there, and Riverdale classmates—through a seamless blend of words and images.  These combine to give readers fully-fleshed, sympathetic characters. 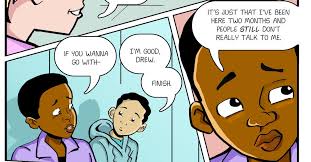 For instance, his home room teacher reveals her unthinking, implicit rejection of Black students as individuals by consistently misnaming them, substituting the similar–sounding names of other Black students.  Jordan and Drew mock her bias (also taking some of the sting out of it) by coming up with ever-changing  names for one another, all only having a “J” or and “D” in common.  Jordan’s resentment only surfaces explicitly after this teacher without permission reads Jordan’s sketch book.   His satirical cartoons there lead to a productive, if painful confrontation with her.  Those black-and-white drawings are as visually distinct from Craft’s full-color main narrative as Jordan’s sketch-book comments are from his otherwise silent acceptance of Riverdale bias.

Yet Craft humorously points out these fallacies and other foibles throughout this novel.  Cartoon visual cues support his cartoon-style of drawing.  Free-floating eyeballs surround Jordan and Drew as their teacher mentions “FINANCIAL AID” in relation to class trips, and all eyes turn towards the two Black kids in the room.  Jordan’s mobile facial expressions and body language are eloquent, often funny responses to conversations he chooses not to have with parents and others.

Sometimes his conflicted emotions are represented by small good and bad “angels” shown simultaneously whispering in his ears!  Craft enhances fast-paced events here by frequently zooming in for close-ups,  breaking or doing away with panel frames, and shifting perspectives, sometimes tilting images for added punch.  The splash pages introducing the novel’s fourteen chapters zestily combine Craft’s skills as author/illustrator.  Each chapter title and double-spread image is a pun on a popular movie or book, jokingly suggesting what is to come.  For example, the chapter set in the school cafeteria is titled “The Hunger Games: Stop Mocking J.”

By the end of his first tumultuous year at Riverdale Academy, Jordan has grown successfully in all ways.  His proud parents say “[Y]ou look like a new kid,” to which Jordan happily replies, “You know, I feel kinda like a new kid.”   As Jerry Craft shows us, this character has learned that he can successfully speak out as well as fit in to more than one social situation.  Cartoon hearts and smiling emojis dot the final images here of Jordan’s Riverdale School pals, while a rainbow and shining sun link them and Jordan to his home neighborhood friends, the kids he will see most in the upcoming summer.

I was happy to learn that a sequel to New Kid will be published in Fall, 2020.  This book’s many memorable moments have me looking ahead to that with my own smile in place.  It is a feeling I believe readers will share—positive anticipation we need in uncertain times too often filled these days with public disasters and upheavals.  Notre Dame’s conflagration is not, I fear, the only fire we will need to douse.