Posted on January 1, 2020 by rosinskynatalie

On the brink of a new year, I have been thinking of medieval explorers at the brink of unknown seas or lands.  “Here be dragons or lions,” their mapmakers warned.  As we enter 2020 here in the U.S., the little known, troubling terrain ahead is more political than geographical, with outcomes still to unfold from the impeachment of President Trump.  Moral compasses seem mislaid, and legal landmarks are in dispute.

That is why this is an apt time to spotlight two recent graphic novels about journeys into the mysterious unknown.  These engrossing books, so different in tone and style, will energize readers as we forge ahead into the new year.  Readers tween and up will revel in the buoyant prospects risk-takers encounter in This Was Our Pact (2019), already on several “best books of the year” lists.  With similar if opposite impact, readers will be moved and provoked by the just-published graphic retelling of Joseph Conrad’s classic novella, Heart of Darkness (1899; 2019).  Both books are memorable– hard to put down before the end and full of discoveries on rereading, too. 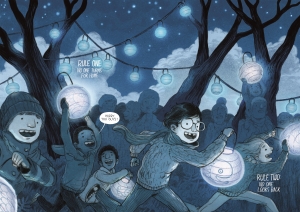 In fantasy novel This Was Our Pact (2019), author/illustrator Ryan Andrews ‘s adventurous tween age characters set out to discover the truth about their town’s autumn equinox festival and legend, its “old song.” Do the lanterns set afloat in the local river each year really become stars?  The boys’ pact is to find out, disregarding family or community rules, yet the band of five bikers quickly dwindles to one, Ben, the teller of this tale.  When tagalong Nathaniel, the neighborhood science “nerd,” catches up to Ben, the two boys dubiously renew the pact, hurrying to catch up to the drifting lanterns.  There is wry humor in their true-to-life remarks to each other, as both boys test their new relationship.  Ben is the white boy with glasses while Nathaniel has darker skin and a puff of black hair.

References to NASA, with high-tech wind farms and a Baptist church in the background, set this night time adventure in today’s United States, yet Andrews—who lives and works in Japan—obviously has drawn upon the art and traditions of that country to create this tale of unexpected friendship and partnership.

Seasonal festivals, floating lanterns, and stories about friendly as well as unfriendly spirits in animal form are venerable aspects of Japanese culture.  Journeys alongside and across gracefully arching bridges, such as those Andrews draws here, are also integral to traditional Japanese landscapes, often seen in wood-block prints.  In an interview, Andrews explains how this work began as a graphic adaptation of a Japanese adventure novel he himself loved as a boy.  The novel’s many wordless frames and passages, some double wide across two pages, reinforce the importance of visual images here, as does Andrews’ consistent use of limited color.  Most of the book has blue backgrounds, but scenes of conflict and possible danger are colored red and characters’ recollections are shown in yellow.

These characters include a talking adult bear and a witch whose familiars include an outsized dog and crows—all drawn, as are the boys, with humor and cartoonish verve rather than realistic accuracy.  Their interactions with Ben and Nathaniel dominate the plot and the novel’s hopeful, open-ended conclusion too.  When the boys become lost, they do not realize that the absent-minded, cranky witch will expect immediate payment for the map they request.  Her demands are more humorous than truly threatening.  The boys also do not believe that the bear’s tale of their community’s equinox lanterns turning into fish, caught each year by his family, can be true.

Yet the possibility of multiple truths, of different belief systems coexisting in harmony, and of genuine friendship despite such differences, is one of the “messages” here.  And that is subtly conveyed, I believe, by a different kind of map.  In the sixth of the book’s eight chapters, we see how the boys’ labelling of star constellations differs from the bear’s labelling of those same stars.  Each contains references to their own community and beliefs.  Noted but not dwelt on by the bear, this difference sets the stage for events at the novel’s conclusion.

In several wordless pages there, we see the bear catch a huge bagful of equinox lantern fish, just before they fly off into the sky to become stars!  Both he and the boys, helping each other along the way, have had their opposing beliefs observed and upheld.  The witch’s earlier remark, that “There’s often more truth to those old songs and stories than folks realize,” was correct.  The boys and bear agree that meeting in another year would be great.  Nathaniel’s sharing of his mother’s rice krispie treats amusingly seals their pledge.

These positive outcomes make the book’s fantastic conclusion a hopeful one, rather than a foolhardy, dire choice.  Rather than realistically turning back homeward, Ben and Nathaniel decide to continue their quest.  The last two pages show them on their bikes, captioned with the words:  “Never turning for home.  Never looking back.”  Whether the reader takes this renewed pact literally or—as Ben has explained the pact to Nathaniel in the book’s opening–as a metaphor for not giving up, these words are an expression of confidence in the future, a belief in the ability to survive and thrive in the unknown.  A map may be useful but it need not be one’s own.  As Andrews himself recently described this book, begun back in 2013 as a web comic, “it is a story about friendship and giving people a chance, especially when other people won’t.  It also shows us how different cultures can interpret the same event in their own unique way.”

Such optimism and peaceful coexistence are not found in Peter Kuper’s graphic adaptation of Heart of Darkness (2019)!  As this award-winning author/illustrator explains in his book’s introduction, Kuper was interested in how some of today’s current events—“corruption in our highest offices, rampant xenophobia, racism at home and abroad”–match up with Joseph Conrad’s story, set in 19th century Africa, at a time when Belgium’s King Leopold cruelly ruled the Congo.  Its narrator, the British sailor Charles Marlow, tells listeners (and us readers) about his earlier journey in the Congo (not identified by name there), when his job was to find and help the mysteriously powerful, successful ivory hunter Kurtz.  We do not hear from any of the native people Kurtz commanded there.  These omissions are one reason acclaimed African novelist Chinua Achebe called Conrad’s Heart of Darkness a “deplorable” and racist work.  Kuper wanted to rectify these omissions.   He explains that he researched Congo photographs from the 1890s and early 1900s  so that his drawings would accurately depict natives’ typical features and traditional dress then as well as local flora and fauna. 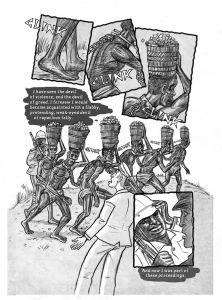 As a result, Kuper’s depictions of chained, beaten, or beheaded African natives are brutally accurate in their detail.  Readers may remain mystified as to what Kurtz, before he dies, means when he utters his last words, “The horror!  The horror!” yet Kuper’s illustrations show us much of the horror perpetrated by Kurtz’s racist, colonizing sense of superiority.  The words Conrad has Kurtz utter—“Exterminate all the brutes!” are reproduced here in one of Kuper’s stunning visual interpretations, a hollow-eyed Kurtz holding up a map of the African continent, seemingly about to squeeze or dash it into oblivion.  This image is indicative of how little Kurtz or other colonial Europeans value African people and distinct cultures.

At another point, when Marlow is describing how Kurtz was sane but “his soul had gone mad,” that he had “kicked the very Earth to pieces,” Kuper draws a fevered Kurtz seemingly tearing apart a map of Africa.  This takes place while Marlow is actually carrying the dying man back to Marlow’s boat, now sailing down river back toward known territory.  Throughout the book, Kuper sometimes juxtaposes images in surreal ways that reflect Marlow’s chaotic thoughts and feelings as well as Kurtz’s.  Kuper uses doublewide pages and overlapping panels of different sizes as well as panel-free pages here  to great effect.   Different depths of grey background help us distinguish storytelling Marlow from the past actions he is narrating in this black-and-white graphic novel.

As in This Was Our Pact, a river and maps are important plot and thematic elements in Kuper’s Heart of Darkness, but the tone and significance of these elements are completely different here.  Confronting good, Ben and Nathaniel hope while Marlow , confronting evil,  despairs.  Kuper’s Heart of Darkness might be read either before or after reading Conrad’s novella itself.  (Besides being available in libraries and book stores, Heart of Darkness is also on-line for free here. ) But this powerful  graphic adaptation also stands on its own.  Besides inspiring readers to turn to Conrad, it might also interest them in Peter Kuper’s earlier graphic novels, some reviewed by me here and here.

What will today’s map look like in 2020?  Will the coming year bring us here in the U.S. closer to a hopeful pact, one grounded in reality as well as fantasy, or have us saying our own version of “The horror!  The horror!”   Time will tell.