After the Pittsburgh Synagogue Massacre

Posted on October 30, 2018 by rosinskynatalie 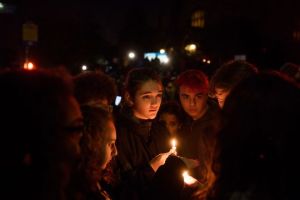 What do we tell school-aged children who see, read, or hear news about this past weekend’s massacre at Pittsburgh’s Tree of Life synagogue?  You already may have had to deal with initial reactions, but I have some print resources to offer—suggestions which may be helpful, depending on the ages and maturity of the children and your relationship (parent, teacher, librarian) to them.

Two graphic novels published by the Anne Frank House in cooperation with the Resistance Museums of Friesland and Amsterdam help explain some of the causes—and horrible results—of 20th century anti-Semitism, unfortunately still pertinent today and so dramatically obvious this past weekend.  A Family Secret (2007) and its sequel The Search (2007), both written and illustrated by Eric Heuvel (originally in Dutch) explore in well-researched and well-crafted form the origins and consequences of anti-Semitism made public policy by Adolph Hitler and his Nazi forces—not only in Germany but in the countries German forces conquered, often with the help of many complicit citizens there.   The results of voting a bigoted despot into power and then going along with increasingly biased laws are dramatized in these novels in ways that will engage and enlighten young readers, even as they resonate loudly for adults.  With an election facing us here in the United States in another week, it is important to remember that many of the most bloodthirsty political leaders of the last 100 years have, around the globe, gained power first as elected officials.

Heuvel’s two graphic novels focus on the lives of two girls—German Jewish refugee Esther and Dutch Protestant Helena—neighbors from ages twelve through sixteen, starting in 1938, when Esther and her family arrive in Amsterdam.   A Family Secret follows the girls through 1942, while The Search concentrates on events in their lives from 1942 onward.  All these events are made even more immediate by being told through a contemporary, framing lens:  We readers discover these stories at the same time that Helena’s twelve- or thirteen-year old grandson Jeroen does, going through mementos in his grandmother’s attic.  It is through his curiosity and persistence that we not only learn about these past events but that Helena discovers that Esther (but not her parents) survived being arrested!  The Search gives most attention to Esther’s (and other Nazi victims’) experiences under the Nazis and in World War II’s aftermath.  Esther’s having found safety and a new life in the United States takes on poignant, new meaning now, just days after the Pittsburgh massacre.

Helena’s family’s reactions to the Nazi invaders runs the gamut: her father is a Dutch police man who dutifully if reluctantly follows Nazi orders to arrest Jews, while one of her brothers  is active in the illegal Dutch resistance movement.   We learn of Dutch individuals who aid Esther while others chase the bewildered, lone girl away.  Some of their Amsterdam neighbors protest Nazi cruelty while more accept it, either out of reluctance to question authority, fear, or their own mistaken, anti-Semitic views.  Through Esther’s accounts, we learn the ways in which these Dutch reactions are akin to some German ones, though the author and his museum expert sources  do an excellent job further spotlighting how economic hardship and scapegoating of Jews in Germany  contributed to Hitler’s election and continued support there.

Drawn in the “clear line” (ligne claire) style popularized by Tin Tin’s Belgian creator Herge, the sharply drawn features of characters here, while cartoonish, are readily understood, reinforcing the emotional power of the lives and events Heuvel recounts.  Body language in these images is also drawn tellingly.  These full-color books use color effectively as well , dropping briefly into grey shades to depict some Nazi brutalities witnessed by the younger Esther in Berlin.  Grey shades also introduce some of what Esther eventually  discovered, and now Jeroen is learning, about the total impact of the Holocaust.  These visuals support the clear ways in which Heuvel through verbal transitions also keeps the different time periods distinct.

When I wrote about the Paris terrorist attacks, including one on a kosher grocery store, back in 2015 and at another point addressed the plight of refugees, including Holocaust survivors, I did not imagine I would be responding in just a few years to a massacre at a United States Jewish synagogue.  As a Jew, seeing how members of other minority groups have been increasingly assaulted and stigmatized recently, and knowing what I do about the long history of anti-Semitism, that was indeed a failure of imagination.  Such failure is a luxury that none of us– regardless of religion, ethnic identity, or political affiliation—can really afford these days.

I hope these suggestions can help you and young readers with their questions.  I plan to return soon to the Gone Graphic I was originally prepared to post this November.