With school supplies already on store shelves and in newspaper ads, autumn is looming!  It is a good time to remember how valuable unstructured play and long summer days can be for our young people before they head back to school.  Two new graphic novels spotlight the joyful growth that sheer play and unhampered summer days may bring to tweens and young teens.  The exuberance and charm of The Cardboard Kingdom (2018) and All Summer Long (2018) will bring smiles to adult faces as well as their intended young audiences.

Do not throw away those cardboard boxes!  You may find, as author/illustrator Chad Sell has, that youngsters want to create creature costumes that imitate or spin off the ones devised by the sixteen kid characters in The Cardboard Kingdom.  This series of interlocking graphic short stories, written by ten collaborators along with Sell as the sole illustrator, features bright colors and boldly-drawn, cartoon-like figures to tackle some serious issues.  Yet this book is never heavy-handed or didactic, mingling humor and lots of imaginative action into neighborhood playtimes that in Sell’s words “tell meaningful, emotional stories rooted in the characters’ own struggles.”  Or, as collaborator Barbara Perez says, “Some of the characters are based on very real parts of each of us.”

Differences flourish in the suburban neighborhood of The Cardboard Kingdom.  The first story, “The Sorceress,” wordlessly and slowly reveals that the kid whose costume resembles a Disney villainess is actually a boy.  Jack later in the book tells his mother that this character is “WHAT I WANT TO BE. . .MAGICAL AND

POWERFUL AND AMAZING.”  Wordless panels or pages are employed effectively throughout the book, with some other kids challenging their traditional gender identities or roles.  The girl neighbor Jack assumes will happily play an endangered princess storms off to return as a competitive knight, while in “The Prince,” Miguel daydreams of being the princess rescued by that handsome hero.  Yet Miguel is satisfied when the Prince suggests that Miguel become the “Royal Rogue,” his compatriot in “the many adventures ahead.”  Crayon-wielding Miguel draws a whole wall full of pictures of these adventures.

Throughout The Cardboard Kingdom, Sell uses such childlike, seemingly wax-crayoned drawings of events as a joyful, unifying technique.  These imperfectly filled-in drawings mirror nearby images, rendered more expertly, as they carry the

narrative along.  Another visual element unifying the book’s fourteen stories is how Sell depicts children’s shadows.  These reflect how the characters imagine themselves rather than the actual outlines of the cardboard costumes they wear.  The short, angular forms cut out of cardboard or discarded cloth for their dramatic play become long, elegant swirls or dangerously large bodies, armor, and weapons.  Sell pays further tribute to childhood imagination by frequently drawing scenes where the neighborhood kids appear both in their home-made costumes and—above their heads or nearby—as the fantasy or fairy tale characters they pretend to be. 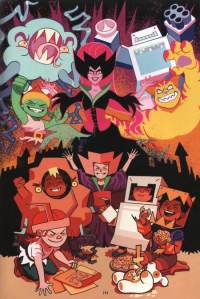 Other kids learn to creatively cooperate rather than compete.  “Alchemist” Alice and “Blacksmith” Becky, after humorously trying to outdo each other for “customers” eager for fantasy weapons, join in a new business venture—the pretend “Dragon’s Head Inn.”  Other kids learn how to cope with family expectations or problems.  Dismayed and subdued by her grandmother’s disapproval, loud Sophie reclaims her natural exuberance as the “Big Banshee.”  Seth arms himself against his parents’ separation, including the potential danger his father now poses, by assuming an imagined, costumed identity—the watchful, protective “Gargoyle.”  Even the somewhat older neighborhood bully, Roy, intrigued by all the fun he sees in cardboard kingdom play, ultimately joins in.  There is also room for kids less inclined towards active play, with the “Scribe” bonding with “Professor Everything” over reading comic books.

The “Mad Scientist,” daughter of Dominican immigrants, brings elements of that country’s folklore to the traditional fantasy and fairy tale adventures these

characters enact.  There is also room for younger brothers and sisters in these playtimes, in a neighborhood of wide-ranging ethnic and racial diversity.  If this diversity seems aspirational rather than realistic, these aspirations leave us feeling hopeful rather than doubtful.  After a grand adventure involving all sixteen kids, the book’s final scene shows the children exiting a school bus on  their first day back to middle school.  Their fantasy shadows hover overhead, representing the psychological and social growth they have achieved during a play-filled summer.

The cast of characters in Hope Larson’s All Summer Long is smaller but no less engaging.  We meet 13-year old best friends and neighbors Bina and Austin on their last day of 7th grade.  They have always spent summer days together.  Bina is dismayed that this summer Austin will be attending a month-long soccer camp.  Even after he returns, Austin does not want to spend as much time as before with a girl best friend who is not a “girlfriend.”  Humorous mishaps involving baby sitting and a longer, painful argument occur as Bina discovers how to fill her summer days, unstructured save for some required reading.  Bina comes to realize how essential music and guitar playing are to her, gaining confidence in her abilities, as she learns to trust a new friendship and reestablishes a strong connection with Austin.  While Austin is a secondary character here, Larson does not slight how he overcomes doubts and peer pressure to figure out who and what he values, once the unstructured half of his summer provides opportunity for this growth.

Family relationships, including teasing ties to older siblings, are important in this graphic novel which features mixed-race and gay families as social norms needing no comment.  Larson’s palette of blacks, whites, and shades of orange supports the 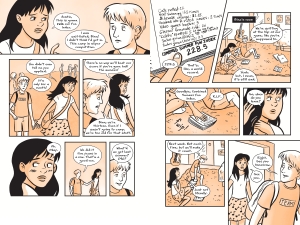 “rightness” of this attitude.  Bina is depicted in orange and Austin in white.  No attention drawn to the fact that Bina’s mother is a different shade of orange, her father white, or to the seemingly unexceptional reality that her white-appearing brother is married to an orange-colored man, one of a few characters drawn with typical African-American features.  Apart from those characters, we have only a few hints about which ethnicities or races are represented by the novel’s many orange figures.  (One hint is the Asian name displayed outside a pharmacy.)

Another storytelling technique Larson uses throughout this book’s eight chapters to engage us with Bina’s summer of self-discovery is the unusual use of boldfaced words representing actions as well as sounds. In varied typefaces, we are told that boldly-drawn, cartoon-featured Bina has begun to “FLOP,” “SLIIIDE,” and “STARE” during her emotional adventures.  Visually enhanced by differing perspectives and alternating close-ups with more distant views,  these adventures conclude with Bina’s first week in eighth grade.  With new self-confidence to counter lingering doubts, she has decided to form her own musical band.  Readers appreciative of Larson’s insights into these teenage mishaps will be pleased to learn that she is planning two sequels to All Summer Long.  She says they will “follow Bina’s “musical journey from. . . starting a band, to navigating the music scene”  and also feature other characters introduced in this graphic novel.

Before Labor Day, enjoy and promote summer play!  Some young (and not so young)

readers may enjoy the opportunities Chad Sell provides to color some images from The Cardboard Kingdom.  There are also directions created by Kostas Ntanos for making some of the book’s costumes.    Others may want to discover what other creative projects using cardboard abound in library books and bookstores.  And, of course, Bina’s tuneful thrumming and eager listening suggest a world of musical possibilities.