Not Just “For the Birds”

Posted on August 1, 2017 by rosinskynatalie

Saying something is “for the birds” is an old-fashioned put-down.  It means “not worth much” and actually refers to the horse droppings on city streets that birds once ate.  (So my saying that President Trump’s policies are “for the birds” would not be a polite and positive comment on his environmental views.)  Today, however, I highlight two recent works—a graphic novel and a picture book—whose positive focus is on (or for) birds.  Moreover, through their enchanting arrays of words and images, these books go beyond their avian story lines to raise other intriguing, meaningful ideas for readers.  Tweens on up will appreciate the graphic novel Audubon, On the Wings of the World (2016; 2017), while readers as young as four will enjoy the picture book The Fog (2017). 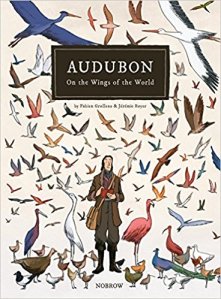 Created by French author Fabien Grolleau and Belgian illustrator Jerem Royer (and translated into English by Etienne Gilfillan), Audubon, On the Wings of the World is the life story of one of France’s most notable immigrants to the U.S., John James Audubon (1785 – 1851).  Today Audubon is renowned for the lifelike, extensive images reproduced in his masterwork, Birds of America (1827 – 1839).  It is considered one of the world’s greatest ornithological studies.  (Some of its illustrations appear in the graphic novel’s End Notes.  All are also now available online.)   Both the large, influential National Audubon Society, advocating for the environment since 1905, and the smaller Audubon International organization are named in honor of this immigrant naturalist and painter.  He left journals and notebooks documenting the extensive, difficult travels he undertook to find and depict our young nation’s wildlife.  Yet Grolleau and Royer in their graphic novel go far beyond these fascinating facts, themselves sometimes embellished by Audubon’s imagination or later recollection.

In the Foreward, Grolleau writes that their “retelling . . . should be read as a more ‘romanticized’ version of Audubon’s life . . . . [which they] hope will give a fuller sense of the man than the mere facts ever could.”  And, indeed, this book is as much

about how scientific passion and artistic obsession can take hold of a person, separating him from family bonds and social conventions, as it is about Audubon’s achievements.  Grolleau and Royer wow readers with their multiple accomplishments here: sophisticated storytelling that smoothly uses images to convey emotion and mental state as well as factual details.

Narrative boxes identify events with place names and dates, but these events—situated in five broader geographical locations—are not always told in a linear 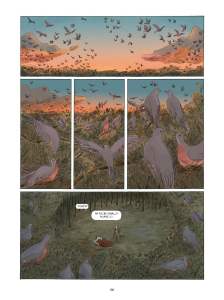 way.  For instance, the book’s opening scenes on the stormy Mississippi River reoccur later in the novel, shown from a different angle.  This technique will intrigue some readers but may put off others.  Similarly, some readers may find much to ponder in how obsessed Audubon, hearing a strange bird call, can leave his wife mid-sentence, just as she is telling him she is again pregnant.  Other readers may simply be dismayed or appalled.  (We see Audubon leaving his family on their own for years at a time.)   The novel’s images also clearly show, however, that Audubon was equally hard on himself in his scientific pursuits and artistic endeavors.

Double-spread and full page images show how flocks of birds and fantastic, sometimes frightening visions consume a fever-ridden Audubon.  He imagines birds with men’s heads, and “converses” with the spirits of his two dead daughters and his own father as they seem to emerge from the swirling Mississippi.  At other

points, Audubon starves, purchasing paints rather than food with his limited money.   Later, in his final years and days, when he is afflicted with dementia, we see how Audubon envisions himself turning into a bird.  We also see how his family has come to reconcile themselves with the impact of Audubon’s unswerving obsessions on their lives.  Wordless panels and sequences of wordless pages are eloquent throughout this novel.  Water colors softly color its pages, where street and nautical scenes, bird and human bodies are precisely drawn but human features are cartoon-like.  (On the Wings of the World won a European comics award for its success with this drawing style, known in French as claire ligne [clear line].)

Readers are left to wonder whether the ornithologist sees more or less than the rest of us, whether he is insightful or self-deluded, through Royer’s depiction of some fantastic elements.  There appear at one point to be mermaids in the Mississippi, while a whole new Bear constellation seems etched into one night-time sky.   Some panels feature montages, showing sequential events all seeming to take place in a circle outside of time.  One of these large panels features a variety of creatures, including a squirrel and warbler, which Audubon imagines watching him as closely as he has observed them!

Such reversal of observer with observed is the premise of the picture book I am pleased to discuss today.  The Fog (2017), written by award-winning Kyo Maclear and illustrated by Kenard Pak, is told from the view of Warble, a small yellow bird who is “a devoted human watcher”!  Warble  has identified hundreds of these fascinating creatures, numbering each one and labelling it by its observable characteristics.  Besides delightful interior images of Warble’s observations, the book’s end papers are filled with images—and their accompanying mock-serious  descriptions—of more than a dozen identifiably distinct human “types.”  Readers young and old will laugh at Pak’s charmingly penciled, then computer-manipulated illustrations of such figures as # 663 SPOTTED AUDIOPHILIC FEMALE (JUVENILE),  #667 SILVER-CRESTED CLAPPER (ELDER), AND #674 SWIFT RED-CAPPED PITCHER.  Yet The Fog is not just humorous but looks at what happens when Warble’s world experiences a mysterious, dramatic change.

A dense fog of unknown origin obscures and drastically limits sight lines in Warble’s northern homeland, “Icy Land.”  How other avians and Warble itself adapt to this loss is one part of the story here.  Another is the relationship Warble establishes with what seems to be be a “lost” human specimen, the creature he identifies as #675 RED-HOODED SPECTACLED FEMALE (JUVENILE).  Young readers 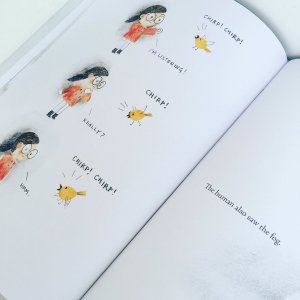 will delight here in recognizing what Warble does not: his new friend, with her own binoculars, is a bird-watcher.  Working together, they send a message about the fog out into the world.   Replies eventually come back, letting them know that other parts of the world have also distressingly been obscured.  Then, the fog slowly lifts as mysteriously as it had appeared.  Warble and his human friend remain close, though, enjoying each other’s company and their restored view of wonderful nature.

While The Fog may be enjoyed on its plot level—a simple fantasy in which engaging characters survive a physical challenge—it also functions as an allegory.  Several

reviewers have noted that its global fog may represent climate change, so evident these days in our real-life Arctic and Antarctic “icy lands.”  In an interview, author Maclear acknowledges that this fog may also represent a state of mind—depression or anxiety, which lessen when one connects with others.  Maclear says that the impact of such moods, and how to manage them, are themes she has dealt with in her award-winning works for adults.  The most recent of these, a non-fiction memoir titled Birds Art Life (2017), not coincidentally examines a year of city-based bird-watching.

Perhaps as another way to manage mood, Maclear reveals how much she enjoys collaborating with illustrators in her many award-nominated works for young readers.  She explains, “I love creating things with other people.”   She works with illustrators by being “specific about what I’m intentionally leaving out.  Whenever you see words in the art, I’ve  written those.  Other times I leave gaps and ask the illustrator to please fill it.  To create a wordless spread that captures a certain sensibility . . . .”  Kenard Pak, who has illustrated other nature and bird books with several authors, certainly meets and exceeds those goals in The Fog.

Are you ready to venture into bird-watching with some young readers?  Author/illustrator Annette Le Blanc Cate’s award-winning Look Up! Bird-Watching in Your Own Backyard (2013) is a fine first resource, particularly for those of us in 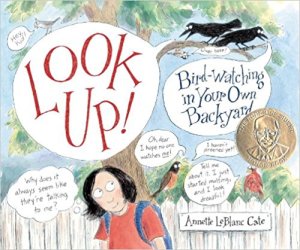 North America.  The Audubon Society produces more detailed regional field guides for North America, as well as hosting a website guide and a mobile guide app.  The Society also lists its own “best books of the year” about birds world-wide.  Of course, check out the library for information about birds near and far, real and imagined.  The library will help you all to “fly” around the world—without wings!