Beyond Graduation: Leaving and Returning Home

Posted on July 1, 2017 by rosinskynatalie

June brings proud smiles and commencement speeches for graduates of all ages.  For many older grads, another rite of passage will soon follow: leaving home for college or that first full-time job.  At least, this is the idealized version of how teens leave the safety of their family homes for the wider world.  As we see in a deeply satisfying new graphic novel, not all teens have such good fortune.  Readers tween on up will find much to enjoy and ponder in Soupy Leaves Home (2017).  It does a great job making its 1930s USA setting accessible to contemporary readers while highlighting emotions and ideas not limited to  one time or place.  And—since it shows an individual coping with and surmounting personal obstacles—Soupy Leaves Home is a tonic that eases today’s too-often sickening nightly news.  Its straightforward, hopeful sentiment is not trumpery. 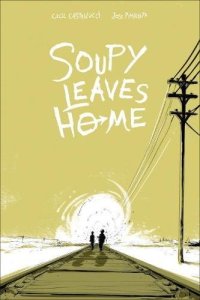 This tale of seventeen year-old Pearl, who disguises herself as a boy and takes to the rails as a hobo named “Soupy,” fleeing her abusive father’s fists, began as personal therapy for its award-winning author Cecil Castelluci.  In interviews, Castelluci has described how she latched onto researching hobos in Depression-era America at a hard time in her own life.  There were female hobos, many of whom dressed as men as they participated in hobo life, with its own code of ethics and justice system.  Those are important plot elements here.    Pearl learns to trust others and herself through her strong friendship with fatherly hobo “Ramshackle,” who has never lost his power to dream.  She is inspired to return home to confront her family and seize her own dream of higher education, still unconventional for women in the 1930s.  Illustrator Jose Pimienta brings Castelluci’s character-driven story to life vividly and insightfully. 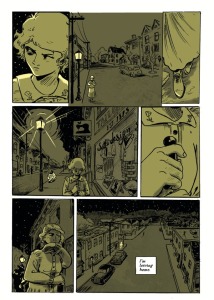 Color is key in this novel.  A changing array of richly-saturated monochrome pages conveys both the intensity and the progress of Soupy’s literal and emotional travels.  As the young hobo begins to open up to the world, some panels and the less frequent full-page and double-page spreads also open up to  two or more colors.  In one such spread, Soupy comes to realize that, like “mulligan stew . . . . [t]he most important ingredient of all” in life “is kindness and an ear to the person everyone shuns.”   Other dual or tri-colored scenes show Soupy’s final courageous return home, once she realizes that “I have to go and face my things or else I’ll never be free.” There, as throughout the novel, joyful imaginings and dreams are depicted in multiple colors—as shapes and figures swirl fantastically through the air. 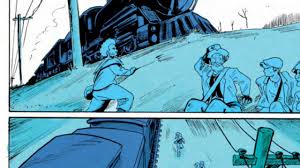 Illustrator Pimienta’s significant role in this novel is also evident in its many wordless pages and panels.  We see Soupy’s fears and doubts in her deftly-etched features, as she reacts to and reflects on events.  For instance, we see how she comes to call herself “Soupy.”  When asked by other hobos for her name, disguised Pearl is ladling up some stew.  That panel contains her one word reply, “Soupy,” which is confirmed by the next wordless panel, a close-up of her hands on that soup bowl.   Similarly, we later see college student Pearl’s success as a well-rounded person depicted in her triumphant body language.  She is posed as a confident traveler, her now woman-styled hair comfortably worn with “boyish” clothing.  Pimienta more than fulfills author Castellucci’s goals for this novel.

As Castellucci explains, having written all-prose as well as graphic novels, she  chose to write this book as a graphic novel because “Soupy is kind of shut down [as a character] and a comic book allows you to have silence.  It also allows you to have scope and vistas.”  Those long views, Castelluci goes on to say, help communicate how different the 1930s were, particularly for hobo travelers, and are important as well for the “magical” imaginings of her characters.  It is fascinating to learn how Castelluci collaborated with illustrator Pimienta.  She outlined page content, but he determined panel placement and highlights.  Castelluci says that with this “full collaboration,” she was able to take her deliberately overwritten pages and “throw out a lot of .  .  . text.”  The remaining dialogue is lean and powerful.  Pimienta himself says he was moved by the book’s “sweet” script, able to relate “to several of the characters, not just Soupy.”  He researched online and through photographs not just general 1930s backgrounds but also specific locations for the small town details depicted in Soupy and Ramshackle’s country-wide travels.  Castelluci provided information about hobo signs, which also appear in a useful appendix to the novel. 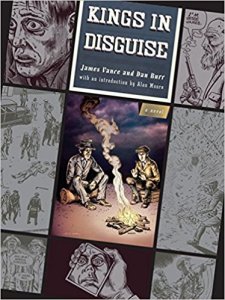 Mature tweens and teen readers interested in hobo life and/or Depression era USA might appreciate two other, hard-hitting graphic novels on this topic.  The multiple award-winning Kings in Disguise (1988; 2006) and its sequel On the Ropes (2013), written by James Vance and illustrated by Dan E. Burr, explore how labor problems—union organizing and strike-breaking—dramatically affect the life of teen-aged hobo Fred.  Unlike Soupy, who comes from a relatively affluent home, Fred takes to the rails due to poverty and scarce jobs.  Drawing upon real-life events between 1932 and 1937, these powerful, comparatively downbeat books were reviewed here in September, 2013.  (Author James Vance died, I was dismayed to learn, just a few weeks ago.  I now want to reread these books in tribute to him!) 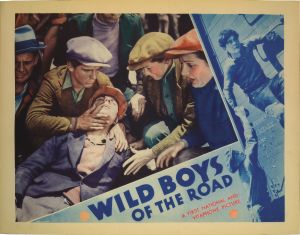 Related works in a different storytelling medium—one in which the images move—include some Hollywood films.  Author Castellucci cites The Journey of Natty Gann (1985) and Sullivan’s Travels (1941) as her movie inspiration, to which I would add director William Wellman’s classic film Wild Boys of the Road (1933).  Despite its title, its main characters include a teen-aged girl hobo.  Unlike Soupy, these young characters do not return to their own homes, but Wellman’s studio bosses—concerned with public reaction to the hard-hitting film—insisted that it have a happy ending comparable to Soupy’s story.  A  judge surprisingly listens to and helps the down-and-out teens.