Posted on September 28, 2014 by rosinskynatalie

I visited Selma Lagerlof’s rural home in central Sweden–an old manor house called Marbacka, close to the town of Sunne and the city of Karlstad–in May, 2008.  I had been thrilled to discover, when planning this trip with my Swedish-American husband, that his family came from the Varmland province that nurtured and inspired Lagerlof.  She was the first woman, as well as the first Swede, in 1909 to win the Nobel prize for literature.  Besides her novels and short stories for adults, Selma Lagerlof wrote a two-volume children’s classic that has been translated into more than 30 languages: The Wonderful Adventures of Nils and The Further Adventures of Nils.

This tale of a tiny boy who flies across Sweden on the back of a goose is a beloved national favorite.  A picture of Nils even adorns the back of the Swedish 20 krona note!  Lagerlof herself graces the front.  In addition to literary pilgrims of all ages, groups of schoolchildren regularly tour Marbacka each spring.  On the day that I visited, some fourth graders impressed me with their English.  Every one of them knew all about the travels of Nils Holgersson, the Swedish Tom Thumb.  Some had also seen the 10 foot-high statue of flying Nils  just a few miles down the road, next to the Rottneros Sculpture Garden. 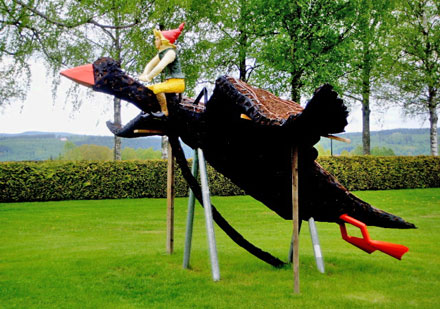 Lagerlof’s novels and tales draw upon people she knew and stories she heard growing up in the small manor house at Marbacka.  Farmers, pastors, and iron foundry owners; Biblical characters and events; gnomes, ghosts, and supernatural happenings–all appear in her works.  Marbacka itself makes an appearance in The Further Adventures of Nils, when Nils meets an author living there.  She has been asked to write a children’s book about Swedish geography and tells Nils he will be part of it!  That is indeed how these books began, commissioned by the Swedish government as educational aids.

Selma Lagerlof loved her childhood home, declaring that “at Marbacka there were no sorrows.”  Her family reluctantly sold Marbacka when Lagerlof was a young woman, but in 1907 and 1910 the successful author purchased and restored the estate and began spending each summer there.  It became her permanent home until her death in 1940.  Lagerlof’s autobiographical works–collected and condensed in Memories of Marbacka–contain descriptions of life on this working farm.  As she requested in her will, Marbacka is displayed to visitors just as it appeared on the day that Lagerlof died.

Visitors pass through lush fields, some planted with oats, to reach Marbacka.  Nearby, small forest creatures scamper through stands of pine and spruce trees.  A dirt road wending upward from the highway leads to the manor itself, still surrounded by the red, wooden outbuildings that are typical in Sweden.  Nowadays, some of these still contain farm implements while others house a cafe and gift shop.  Lagerlof’s strong interest in gardening is evident right outside, in carefully arranged flower and vegetable patches, dotted with ornamental hedges and fruit trees.  Gravel paths provide an easy stroll this extensive garden, which Lagerlof herself helped design and tend. 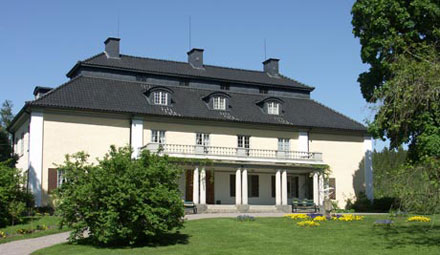 The author had the current manor house rebuilt from 1921 to 1923.  It is a soft white, three-story stucco building with a dark roof–only somewhat larger than the cozy, five room, one-and-a-half story red wooden building of Lagerlof’s childhood.  The art works and furniture that fill its elegant rooms reflect Lagerlof’s love of the Swedish countryside, its folk songs, and legends, and her family.  One parlor is graced with large portraits of her companion Sophie Elkan and Elkan’s family.  Beyond these more formal rooms, it is just fun to see the many coffee sets that the author had on display in her kitchen and hairbrushes and other personal items on a vanity in her bedroom.  It is Lagerlof’s combined library and study, however, that holds the most fascination for readers and writers.

Illustrations from Lagerlof’s books decorate the walls.  Translations of all of the author’s works fill many of its bookshelves.  Others are adorned with handmade Nils items that schoolchildren sent to the author of their favorite book.  Cloth, clay, and wooden figures of Nils’ characters–along with paintings and letters from children–fill an entire, glassed-in cabinet.  A large wooden desk draws the eye onward.  It seems almost alive with creative energy, with items arranged to suit a working author of an earlier generation.  A manual typewriter sits within easy reach of a chair on one side, while an inkstand, paper, pen, and blotter face the chair opposite.  Moving closer, one sees a handwritten letter signed “Selma Lagerlof” tucked into the blotter.  Is is as though the author had just stepped away for a brief moment . . . .

Children and adults who have read Nils or one of Lagerlof’s folktales,  including her all-ages Christmas stories, will enjoy visiting Marbacka.  Whether exploring on one’s own or with a guided group, after a pleasant hour or so be certain to stop at the cafe for “Selma’s cake,” a spice cake served with the traditional lingonberry jam and whipped cream.  The gift shop has items aimed for both children and adults.  Check Marbacka’s website for information about visiting hours and events, and look at the National Library of Sweden’s webpage to learn about its Lagerlof collection.