Posted on November 16, 2017 by rosinskynatalie

Our recent ten day sojourn in Santa Fe, New Mexico reminded me of how culture and personal vision determine which particular portions of Mother Earth we hold sacred.  Writing from the small adobe house we were renting, I was also struck anew by how these views may clash. 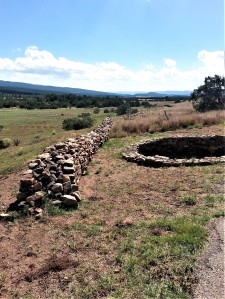 At Pecos National Monument, only ruins remain of the large pueblo that once housed 2000 people, traders as well as foragers, farmers, and hunters.  These ruins include kivas, the circular and ancient Indian underground sites for religious ceremonies.  From the 16th century onward, invading Spanish soldiers—accompanied by proselytizing Catholic priests—did not care that this land was worshipped by generations of pueblo dwellers as well as the hogan-dwelling Navajo.  (The nearby “Four Corners” region, the intersection of present-day Arizona, New Mexico, Colorado, and Utah, remains the site centrally sacred to the Navajo.)  Spain and its priests tore and twisted these ancient, sacred bonds—a rupture bitterly epitomized for me by one fact, repeated in local museum exhibits: Pueblo dwellers froze one winter for lack of firewood, while Catholic missionaries forced them to craft 600 wooden crosses.

Even as I reread Willa Cather’s achingly beautiful Death Comes for the Archibishop, with its depiction of the powerful faith and dedication of its central characters’ 19th century real-life inspirations, Archbishop Jean-Baptiste Lamy and Bishop Joseph P. Marchebeauf, I could not forget the suffering inflicted by their proselytizing predecessors—cruelties that led Native peoples across the Southwest, in 1680 C.E., to rebel violently.  Even as I visited the cathedral Archibishop Lamy built, where colorful Penitente-style Stations of the Cross and a statue

As a Jew, I cannot escape the parallels here with modern Israel: the ways in which

the Jewish state has taken and continues to usurp lands once owned by Palestinians.  Reclaiming its “holy land”—holy according to Judaism’s sacred books—Israel has exiled some Palestinians and shunts others into restricted areas even more tightly guarded than the “Indian reservations” of the U.S. old Wild West.  It is this volatile, toxic situation that today breeds suicide bombers and hair-trigger Israeli army guards, and brings weapons instead of worship to Jerusalem’s Temple Mount, which is also sacred to Muslims.

I am not alone in seeing these painful parallels between Israeli policies and the brutal, ethnocentric colonization of North America.  One notable commentary about this is Michael Chabon’s award-winning novel The Yiddish Policman’s Union (2007).  This speculative work is set in an alternate-history Alaska, where a Jewish state sanctioned by the U.S. government has displaced the Native Tinglit from their ancestral lands.  While the novel’s narrator, a Jewish detective, is able to solve its central murder mystery, with Biblical prophecies about Israel revealed to be part of the plot, the underlying tensions among Jews, Tinglits, and the powers-that-be remain unresolved.  At the novel’s end, as the Jews’ 60 year-long mandate in Alaska is set to expire, readers are left to wonder whether another diaspora, more armed conflict, or both will occur.  As in today’s real-life Israel, there are a plethora of possible outcomes to consider and negotiate—none of them easy or wholly satisfactory.

Can one’s personal vision transcend such earthly divisions and conflicts, reflecting an appreciation of Mother Earth’s sanctity not linked to any religion or culture?  Does one have to have ancestral connections to land to find it holy?  Our visits last

month to Santa Fe’s Georgia O’Keefe Museum and to this artist’s former studio-home in nearby Abiquiu provided life-affirming, humanist answers.  We saw in intimate detail how this Wisconsin native, who also had found inspiration in city canyons, adopted New Mexico’s austere desert landscapes as her ultimate spiritual home.  O’Keefe’s secular art works are paeans of praise as sincere as any prayers.

Yet this genius of abstract art was privileged by more than talent.  She had the wealth she and her husband, world-renowned photographer Alfred Stieglitz, had earned to secure her isolated comfort and privacy, purchasing and renovating a large adobe homestead.  And that comfort, though simple in lifestyle, was maintained throughout O’Keefe’s long life in New Mexico through the willing labor of her Pueblo neighbors and companions.  They, on the other hand, had and still keep control of their property only according to rigid, centuries-old Spanish land grants.  Ironically, as I learned on our tour, those documents require non-blood relatives to vacate their home if a lineal descendent no longer lives there.  Family feeling and history are not, according to New Mexico law, bonds holy enough to secure those plots of Mother Earth. 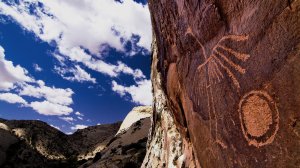 Nor is such legislated cruelty or the desecration of sacred sites confined to outdated laws or past events.  The looming crisis at Utah’s Bears Ears National Monument, which contains burial and archeological sites sacred to the Navajo and other tribes, is just one example.  As recently as last month, President Trump threatened to remove  Bears Ears from the list of official national monuments, land protected by law from purchase and development.  Tribal leaders are prepared to fight such a decision in court and through on-site demonstrations as well.  They will agitate and demonstrate much as displaced Palestinians have in the past, when peaceful resolutions to such conflicts were still probable outcomes.  Of course, as seen on current newscasts, the possibility of violence at U.S. demonstrations is becoming a new “normal.”  U.S. citizens need to keep our own Native American challenges in mind, averting and mending wrongs, even as we question Israel’s policies on land use and access.

I am ruefully aware, though, that I reflect here as the privileged past   tenant of an unencumbered, “Airbnb” adobe house, luxurious by many standards.  I and my husband were tourists in this land holy to some people and underdeveloped according to others.  Similarly, as a diaspora Jew I do not live with the daily struggles and stresses of life in Israel, with the different challenges inhabitants face.  That in fact is one criticism that some Israelis have levelled at a new anthology I find moving and insightful about Israel’s largest internal conflict: Kingdom of Olives and Ash: Writers Confront the Occupation (2017).  Its editors, Michael Chabon and Ayelet Waldman, include Palestinian authors among other international voices, inviting first-hand accounts of sacrilege as well as the sacred.  Unfortunately, these experiences seem twinned, regardless of which holy land one venerates or visits.  Conflict continues to profane our better instincts and the beauty, if not the sanctity, of Mother Earth.