Posted on April 1, 2017 by rosinskynatalie

Even experienced gardeners may be fooled by hopes raised by fine April weather.  Colorful buds promising full flowers can still be savaged this month by thundering rains, high winds, or even a sudden frost.  Similarly, children and others may be lulled by the appearance and expectation of parental concern.  After all, that is what every child deserves as well as needs.  Yet some abused children refuse to admit or even recognize that a parent is harming them!   Some abusive parents also do not acknowledge or perhaps understand the havoc they wreck.   (One might make similar observations about the relationships between some political leaders and their followers.)

Today I am going to highlight two recent, remarkable graphic novels about the immediate or lingering effects of child abuse, each with its own distinctive and dramatically different visual style.  I will also touch upon another now-classic graphic novel addressing this topic—a work emphasizing positive recovery—which helped kindle my interest in graphic novels back in 1995, with its first publication.  Needless to say, these works are best suited for readers teen and up.  With adult guidance, some tweens might also appreciate these novels.

Belgian illustrator/author Brecht Evens’ Panther (2016, translated by Laura Watkinson and Michele Hutchinson) is so pretty that its terrors sneak up on us.  Bold colors and multiple patterns taken from varied artistic traditions gradually reveal that young Christine’s imaginary playmate Panther is much more than a substitute for the pet cat who dies in chapter one.  Panther seemingly represents Christine’s half-understood awareness of the sexual abuse her father is apparently inflicting on her.  At first a (to us) suspiciously obliging playmate, changing storylines at young Christine’s every fantastic whim, this creature has an unnatural ability to literally change his spots and clothing which becomes increasingly more ominous.   It parallels her father’s refusal to give 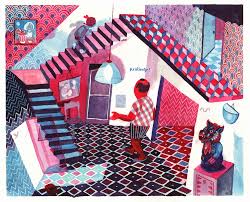 Christine a key to lock her bedroom, saying she is too young even as he says at bed time that she is “getting to be a big girl.”  Christine’s terrified expression at that point solidifies our growing unease with Evens’ shifting palette.  The cool, calm blues and soft reds of Christine’s everyday world no longer signal safety as we see objects there transformed into the hot tones and swirling images of Panther-dominated experiences.

Panther himself darkens into deep black and white as he lulls Christine asleep, directing her to count backward from one hundred.  By the book’s conclusion, what had been abstract overlays of multiple patterns, including some suggesting voyeuristic eyes and full-lipped mouths, are transformed into an abstract image of a rampaging black and white creature entering and then exploding out of Christine’s bedroom bureau.  This seeming last page is really itself a physical overlay, opening from the book’s central spine to reveal two elaborate pages of full-colored details from the many stories Panther has spun to ensnare Christine.  The easily-overlooked nature of this double spread sums up the techniques and hidden depths of incest here.

The final pages of Panther confirm our worst fears, as this sly figure introduces new characters into so-called playtime.  He tells Christine, “Here’s a game! If you stroke Giraffe, he changes shape.  You want to try?”  The eyeless, phallic-shaped depiction of Giraffe leaves little to the (mature) imagination here.  Strange versions of other, once familiar stuffed toys also appear as Christine is nightmarishly held down just before a starkly-centered, black-and-white game of “doctor” appears to take place.  Evens has said that his goal with this book was to “swing . . .  a pendulum between desirable fun and absolute horror.”  Using colored ink and markers, gouache, black ink, and crayons, he notes that his work here was influenced by “all kinds of children’s stories” but was specifically a “reaction to. . .  the modern ones, where monsters are funny.”   On both counts, Evens’ graphic novel is a gorgeously disturbing, unforgettable success.

Just published in English,  Pretending is Lying (2017; 2007) is a memoir by Belgian illustrator/author Dominique Goblet that examines the long-term effects of

emotional as well as physical child abuse.  Goblet worked with translator Sophie Yanow to communicate here the difficult memories that she first began sketching out in 1995.  Goblet also had her sometime romantic partner, author Guy Marc, write his “side” of some of their shared life together that she then went on to illustrate.  The extent to which adult relationships figure in this memoir (including a page with nude figures in bed) make it more suited and meaningful for older teen readers.

Using mainly pencil and charcoal on sepia or yellow-toned paper, Goblet’s palette is much more subdued and her drawing style looser and sometimes more angular than Brecht Evens.  As she depicts how her alcoholic father was and remains an emotional bully and batterer, even mistreating his dog and ghost-faced second wife, Goblet varies the size and shape of letters in ways that make them shout or shriek.  Now a parent herself, Goblet has a distant and uneasy relationship with her father.   As we see, he has not changed, and Goblet rightly fears his interactions with her four-year old daughter.  It is difficult to stand up to him when he begins to bully this child too.  Goblet’s episodic depiction of her involvement with Guy Marc and with her daughter’s father also seems linked to the emotional upheavals of her childhood.  Yet, while her blowhard father is emotionally abusive, we see in one shocking episode that it was Goblet’s mother who was physically abusive.

Stressed both by her drunken husband’s meandering complaints and a young Dominque’s irritating play noises, her mother orders her up to the attic, not it seems for the first time, as Dominque wails, “[N]ot the attic.  Nooo, not the attic!!”  In stunning juxtapositions, we then see images of the televised car race crash her father is watching while we hear her mother’s announcement, “THAT’S WHAT WE HAVE TO DO WITH NASTY LITTLE GIRLS LIKE YOU . . .WE HAVE TO STRING THEM UP!!! . . . PUT YOUR HANDS IN THE AIR!!’  When we next see young Dominque, her face in tears and arms roped up to the attic ceiling, we hear not her whimpers but the televised reports of the crash.   Even though a few pages later her mother apologizes to young Dominque, holding her on her lap and promising this punishment will not happen again, it hard for us (and perhaps Dominique Goblet herself) to believe her.

That these parental betrayals linger is highlighted by the four page, red-penciled prologue Goblet added to the first versions of her memoir.  It depicts her and her daughter, this child believing after a tumble scrapes her knees and tears her

leggings that Goblet “can do magic.”  Yet all Goblet actually has done is reverse the leggings so their holes are out of sight!  Such trust and love for a seemingly all-powerful parent emphasizes what is crushed when mothers or fathers abuse their children.  The effects may well last years, just as the amorphous grey images of past loves “haunt” pages in this memoir.  Has the adult Goblet overcome her assorted traumas?  In her acknowledgments, perhaps crediting all the emotional abuse her mother herself experienced, the author/illustrator includes thanks to “. . . my mother, for whom I have lots of love and who, I hope, will consider this book an homage.”  Goblet does not mention her father.  And the possibility of stable romantic love remains unknown, just like the condition of an injured bird in the memoir’s last pages, set free only to fly out-of-sight.

My attentive husband’s noting new arrivals in a university library led me to the final book in today’s posting.  The Tale of One Bad Rat (1995; 2010), by acclaimed British illustrator/author Bryan Talbot, is both more forthright and more hopeful about the facts of child abuse and about survivors’ ability with help to overcome this trauma.  Its central character has been sexually abused for years by her father and emotionally abused by her mother.  Since its initial publication, this moving, award-winning account of 16 year-old runaway Helen has been reprinted in more than a dozen countries and used in multiple child abuse centers and literacy programs.  Yet it is this novel’s artistry rather than didactic contact that makes it so memorable and satisfying for readers in any context.

Many wordless panels, along with succinct dialogue, communicate Helen’s physical and mental travels as she arrives in London, living homeless there until her inner demons drive her almost by accident to the Lake Country district made famous in part by her favorite childhood author/illustrator, Beatrix Potter.  As Helen says to herself at one point about the sexual abuse she suffered for years, “I just can’t seem to get Dad out of my head.”  Yet she succeeds—through emotional support, books about abuse, and talking about and confronting her parents—in finally doing just that.  At first unable to permit any physical touch, Helen at this book’s end is able to hug those who have helped her.  The healing, peaceful environment of the Lake District is also a boon here, as are the animal tales created by Beatrix Potter, herself a survivor of emotional abuse.  These tales are what in part inspired Helen to rescue and make a pet of one of her school’s lab rats.

Color often codes situations in this re-readable graphic novel, with red spotlighting flashbacks to abusive scenes and current nightmares and deep gold indicating inner thoughts.  Initially suicidal, Helen learns to reject the shame and guilt she has felt about her past.  When her pet rat is killed, she imagines herself accompanied by a larger version of this friend.  Unlike Brecht Evens’ panther, however, this imaginary construct is supportive.  Signs of artistic Helen’s self-acceptance and ability to move on include her bidding farewell to imaginary “Rat” and creating her own, fable-like version of her experiences in a homemade, illustrated picture book, itself titled “The Tale of One Bad Rat.”  This title is, of

course, an homage to Beatrix Potter’s many small masterpieces, such as The Tale of Peter Rabbit and The Tale of Two Bad Mice.

This April, anticipating springtime holidays celebrating both rebirth and freedom, I find it good to remember that human spirit and fellowship can triumph over adverse circumstances.  Such determination and reminders are important not only on the individual level but as people band together to achieve community and other political goals.  Not all April hopes and promises are false!