Posted on December 1, 2016 by rosinskynatalie

Two recent, compelling fairy tale volumes would make excellent gifts this holiday season.  Matt Phelan’s Snow White: A Graphic Novel (2016) and Shaun Tan’s The Singing Bones (2015; 2016) are my enchanting focus today.  Viewed separately or together, these books’ very different visual takes on classic stories demonstrate the wonderful breadth of unfettered imagination.  Readers tween and up will appreciate these works rooted in folk tales first collected and published by the German brothers Jacob and Wilhelm Grimm between 1812 and 1857.   Those original Grimm stories were more violent and darker than many modern versions, watered down to be “suitable” for younger audiences—most famously by cartoon mogul Walt Disney.  Phelan and Tan’s books, while not totally grim, remain truer to the original tales.

Award-winning author/illustrator Phelan (first reviewed here in December, 2013) drew on iconic photographs and films to set his Snow White primarily in Depression-era U.S.A.  Living in 1918 New York City, Snow is a happy, well-to-do child whose later tribulations take place after the 1929 stock market crash precipitates the Depression.  The black-and-white, sepia, or lightly tinted pages of this book reflect photos and movies typical in the 1920s and 1930s.   Before full-color films became the norm, silent black-and-white movies sometimes had a few tinted scenes to reinforce changes in mood or action.  Vivid color—the red of blood and the deceptive lushness of poisoned apples or lips—is used sparingly here, to great dramatic effect.  Similarly, the book’s happy ending (after a dramatic kiss, not in a forest or castle but a department store window!) is reinforced by pages drawn and water-colored in a range of pastel colors. 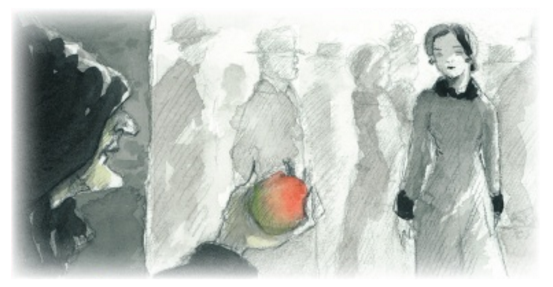 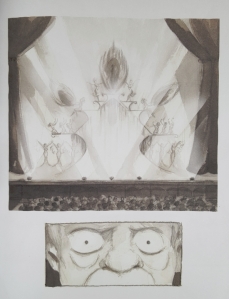 Phelan effectively updates and anchors Snow White to this specific time and place in many ways.  Her evil stepmother is a Ziegfeld Follies star whose desire for the spotlight is exceeded only by her greed; here, she is inspired by messages from a seemingly demonic stock exchange ticker tape machine, rather than a magic mirror.  Her plots, machinations, and evil deeds are effectively conveyed by telling close-ups, another cinematic technique Phelan employs.  His knowledge and love of silent films is also evident in the many wordless scenes in the book, some as long as ten or twelve double spread pages.  The electrifying end to that murderous Follies star’s schemes —in a chapter aptly titled “Up in Lights”—is almost totally wordless, yet very rich in emotion as well as fast-paced action.  Sound-effect words and street signs, along with facial expressions, communicate so much in these pages, as they do throughout the book.

This story’s Depression-era characters include seven homeless boys, living hand-to-mouth on the streets and in a hobo encampment, who are Phelan’s fairy tale “dwarves,” sheltering, rescuing, and for a time mourning Snow White.  Their initially suspicious, pugnacious faces are eloquent, even when all their leader will reveal about them is the dismissive, wary phrase, “We’re the Seven.  That’s all you need to know.”   Readers may become misty-eyed when each boy, mourning Snow’s apparent death, whispers his name into her ear.

Phelan strives for such emotional response in his works.  In an interview , he has said “that emotional connection is  . . . something I aspire to in my work.”  That is why his drawing is not totally realistic in style: as he puts it, “I’ve always loved sketches and art that has a ‘just enough’ quality to it.”  He adds that, rather than using a guide sketch, after much time in preparation and initial thumb-nail sketches (Snow White: A Graphic Novel took three years to complete), he draws freehand from those sketches, working “quickly on each panel.  I want a certain energy to the line and the watercolor.”   Phelan’s typical use of un-bordered, irregularly sized panels and double spread pages, some without any panels at all, adds to the vibrancy of his story-telling goals and technique. 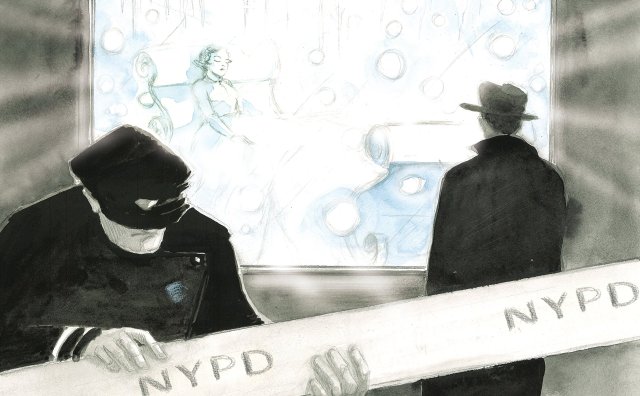 While Matt Phelan avoided reading multiple written versions of Snow White, wanting “to approach the story fresh,” Shaun Tan’s fairy tale volume was inspired by the written word.  Specifically, after designing the cover and a few internal illustrations for 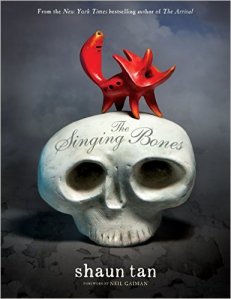 a German language edition of Grimm’s fairy tales, Tan was hooked!  That book was a translation of noted British author Philip Pullman’s Fairy Tales from the Brothers Grimm (Viking, 2012), which contained Pullman’s favorite fifty tales.  Tan (reviewed here in August, 2014 and April, 2015)  was so entranced by Pullman’s language and storytelling that he went on to identify and create sculptures in The Singing Bones for seventy-five Grimm tales.  Tan’s book, however, does not contain complete versions of these tales.  Instead, a significant passage from a tale appears on the left hand page, with Tan’s related sculpture appearing on the opposite right-hand page.  Noted fairy tale scholar and translator Jack Zipes is the author of these passages, as well as the Annotated Index summarizing the tales’ plots.

Award-winning Tan’s imaginative take on each tale differs dramatically from Phelan’s.  Rather than situating the tales in a particular time and place, Tan’s sculpture captures the emotional center of each story, recreating people, creatures, and items with minimal detail and dreamlike distortion.  In his Afterward, Tan writes that he was “inspired by Inuit stone carvings and pre-Columbian clay figurines . . . .”  He used papier-mache and air-dried clay, colored with acrylic paint, metal oxides, and shoe polish, to create his small-scale pieces.  Elsewhere, Tan notes that some of his  paper sculpting techniques were folk craft taught by his Malaysian/Chinese father.    With input from his skilled photographer wife, Inari Kiuru, Tan then designed for The Singing Bones the photographed versions of his three-dimensional art. 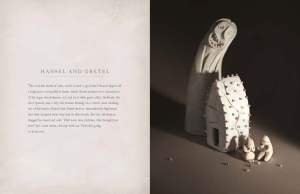 These are powerful, haunting images.  Tan embodies the story of Snow White in a sculpture of the evil queen or stepmother, red with violent envy; sharp-featured with consuming, murderous ambition; shadowed by pride which has made her spiked crown as large and important as her barely human head.  His Hansel and Gretel are both too hungry and too greedy for sweets to see the dangerous, powerful witch lurking behind the

seemingly harmless old woman who then invites them inside her candy-studded cottage.  The reader, though, sees that monstrous figure as well as the cracks in the cottage, with its doorway that also resembles the opening of a clay oven.  It is the weariness of toiling Cinderella, falling asleep inside the sooty bed of a fireless chimney, rather than her glass slipper and romance, that Tan emphasizes.  And it is the dangerous naivety of Little Red Cap, contrasted with the wolf’s smug assurance and size, rather than her final rescue that Tan embodies in highlight. Readers will want to linger over these familiar tales, and also make good use of the index to discover the full stories behind the many compelling pieces born of lesser known tales. 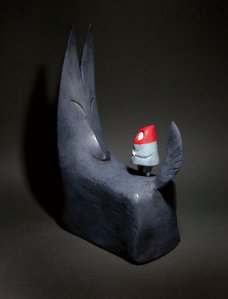 Like author Neil Gaiman, who wrote the Foreword to The Singing Bones, I long to touch these pieces, to revel in their textures and also view them from different angles.  My desire here is also fed by my own dabbling in clay this past year, producing pieces heavier on emotion than realism.  It was researching folk tales for possible inspiration for my future sculptures that led me to discover Shaun Tan’s three-dimensional art!   Now, I need to see which tales apart from the Grimm brothers might spark some more of my own amateur efforts.  First up: a look into the folk tales of my own Eastern European Jewish heritage.

Are you interested in other graphic works depicting folk or fairy tales from different traditions? There are many picture books depicting “Cinderella” stories around the globe.  Ed Young’s award-winning Lon Po Po (1989;1996), set in China; John Steptoe’s acclaimed Mufaro’s Beautiful Daughters (1978; 2008), set in Africa; and Tomie de Paola’s Adelita (2002;2004), set in Mexico, are only a few.  I myself plan to catch up with an award-winning volume of Native American graphic folk tales, edited by Matt Dembicki, Trickster: Native American Tales, A Graphic Collection (2010).  It features the combined efforts of Native storytellers with comic book artists.