Posted on September 1, 2016 by rosinskynatalie

Is that alarm clock set to go off for school or work?  And how do the young people in your life feel, come September, when they answer that question? 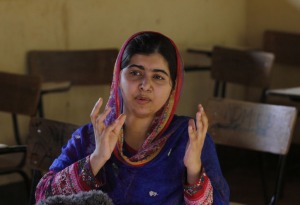 Here in the U.S., Labor Day weekend marks the unofficial end of summer and start of another school year.  You probably know at least a few kids unhappy with this turn of events!  Yet around the globe school remains an out-of-reach luxury for too many kids, many of whom labor in unsafe and unhealthy conditions.  Still other young people world-wide are denied an education just because they are female.  These inequities are the focus of today’s blog, which spotlights three excellent picture books.  A recent visit to the Twin Cities by Malala Yousafzazi, the Pakastini teen whose brave, inspirational struggle for an education led to a Nobel Peace Prize, had me looking for graphic works about her and these topics.

Malala’s remarkable story has been told in a text-based book for older kids and teens—I am Mala: How One Girl Stood Up for Education and Changed the World (2014, co-authored with Patricia McCormick, adapted from the 2013 book co-authored by Christina Lamb).  But I also sought and found works that would bring the hard facts and emotional realities of child labor to even younger readers.  After all, children as young as four labor around the globe.  I hoped I would find books that would uplift as much as dismay—and I am happy to say that I did.

Award-winning author/illustrator Jeanette Winter has created an unusual as well as powerful dual biography in Malala: A Brave Girl from Pakistan/Iqbal: A Brave Boy from Pakistan (2014).  As one of its covers aptly notes about this volume, it contains “Two stories of bravery in one beautiful book.”  What is remarkable about these twinned stories is that readers can begin either narrative by flipping the volume upside down! Each begins on a separate side of the book, and each concludes as the stories “meet” in the wordless mid-point double spread.  There, in a visually poetic rendering of the similar dreams of each child, Iqbal is shown on one page seeming to reach for a kite, while Malala is depicted on the other holding onto one as it soars. The dreamlike nature of this scene is heightened by its nighttime background, with stars dotting the dark  sky.  This sky unites the pages, as do the balanced composition of images and reuse of colors.  Readers merely flip the book to bring the second scene into more prominent focus.

Malala struggled for her education, surviving an assassination attempt in 2012, because Islamic zealots in Pakistan thought girls and women should not read anything but religious texts.  She and her classmates had to attend school in secret.  Poverty—and lack of laws against child labor—a decade earlier limited Iqbal’s access to education.  From the age of four, he worked long hours in a carpet factory, sent there by his parents to pay off their debt.  The ways in which this labor stunted and twisted Iqbal’s body, and the beatings he suffered, were long term assaults, the “flip side” of the bullets that in just seconds nearly killed Malala.  It was her extended recovery from this attack that took much time and multiple surgeries.  Yet, as young readers will discover, while Iqbal finally freed himself and others, acquiring and using education to speak out against child labor, bullets also cut short his life.  This murder was probable retaliation by those who lost money and future profits when local laws against child labor became better known, enforced, and expanded. 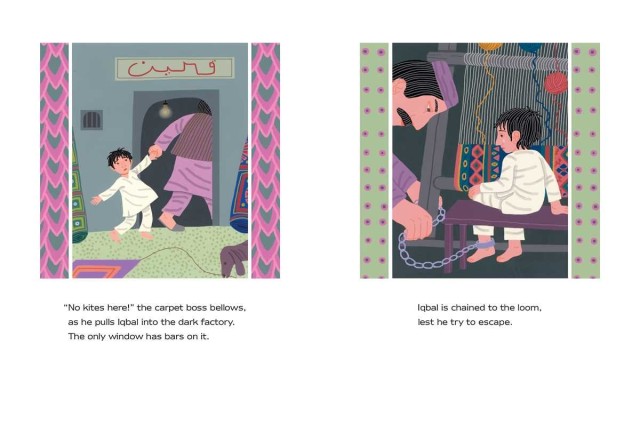 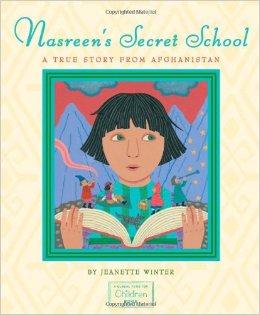 This book’s images display Winters’ signature style—vivid colors, flat perspective which removes the need for shading or shadows, and frequent use of decorative borders to frame scenes.  She also depicts some sequential events in different sections of the same setting.  That this so-called “folk art” style is also reminiscent of Persian miniature paintings is a further plus in this biography of two Muslim children, as it is in Winters’ related book about forbidden education for girls, Nasreen’s Secret School: A True Story from Afghanistan (2009).  That multiple award-winning work shows both the devastating effects of repression by the Taliban regime there between 1996 and 2001 and the healing power of education.

After her father is brutally arrested and her mother disappears, traumatized Nasreen stops speaking.  Her sad face and blank stare do not change even when her worried grandmother finds and sends Nasreen to “a secret school for girls.”  Grandmother explains that she wants Nasreen to “learn about the world” as the women in her family have in better, less narrow-minded times.  Nasreen does begin to speak—and feel, and make a friend—but only after many months.  This healing is indeed spurred and supported by the worlds contained and revealed in books.

Besides the wonderful cover image showing the varied folk and fairy tale characters contained within a book, Winters’ vivid illustrations, one per page, bring to life such succinct phrases as “Windows opened for Nasreen in that little schoolroom.”

Illustrations here expand the text, as when Nasreen’s lost parents, shown holding hands, are depicted in the “blue sky beyond those dark clouds” that once obscured Nasreen’s inner as well as outer sight.  It is also telling that Grandmother concludes this story with full-hearted piety, with the typical Muslim expression following an expressed hope, “Insha’ Allah” (God willing).  Her pious wish, so unlike the Taliban’s limits on women’s education, is for Nasreen’s continued growth—that “soldiers can never close the windows that have opened for [her] granddaughter.” The centrality of this goal and this family connection is reinforced by Winters’ final image, showing us  Grandmother and Nasreen close together, in the center of a framed yet boundless night sky. 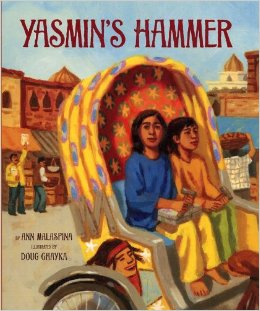 Yasmin’s Hammer (2010; 2015), written by Ann Malaspina and illustrated by Doug Chayka, is set in the country of Bangladesh, once known as East Pakistan.   Its fictional account, rooted in real-life experiences, harkens back to Iqbal’s tale, as it is poverty that limits Yasmin’s access to education.  Yasmin wants to know more to satisfy her curiosity and also to have job opportunities now far beyond her reach.  Her family would like to send her to school, but they need the money that Yasmin, about 10 or 11 years old, and her younger sister Mita earn each day as brick chippers.  This hot, dusty work leaves the girls with coughs that show how their lungs are being harmed, even as their bloodied and blistered fingers are the more apparent injuries.

Yet the coins the girls bring home help pay for food and shelter, and will help their hard-working parents save enough money to purchase the rented rickshaw Father now pedals each day.  ( Mother spends long hours washing clothes and cleaning houses.)  Until then, it seems Yasmin must be content with the promised “Soon” she hears from her parents, a word she repeats to herself whenever school is mentioned.

That litany takes on new meaning when, having taken on even more work, thrifty Yasmin saves enough to buy and bring home a book.  None of them can read it!  By

glowing candlelight, she and her family puzzle out what some of the words in this alphabet picture book might be. Her parents are moved by this experience.  They increase their own heavy workloads, earning more money, so that Father can surprise Yasmin and Mita one morning with a rickshaw ride along an unknown route.  The girls are not going to the brickyard to use their hammers.  It is her father’s smile which helps Yasmine realize joyfully, as the book concludes, where they are instead headed: “Then I know.  This is the way to school.”

The amount of text in this book, along with its front source list and informative back matter, including a glossary, make it well-suited for upper elementary age readers.  Yet readers of any age will appreciate the glowing colors of Chayka’s full page illustrations, originally completed as oil on canvas paintings.  He captures not only the bustling, vivid hues of Bangladesh’s capital city, Dhaka, where Yasmin’s family now lives, but also the calm, softer tones of their earlier village home, before it was destroyed by a cyclone.  And Chayka succeeds, I believe, in his stated aim of depicting the “brightness and inner life of the characters.”  Like Iqbal, Yasmin never loses sight of her goal, and her efforts inspire others to help her to reach it.

Young readers may also appreciate learning more about the history of child labor within the U.S.  While the text of Russell Freedman’s award-winning Kids at Work: Lewis Hine and the Crusade Against Child Labor (1994; 1998) is best suited to upper elementary and older readers, Hines’ insightful photographs—still acting as change agents—will provoke interest and discussion in readers of all ages.  Susan Campbell Bartoletti’s Kids on Strike (1999) is similarly illustrated with dramatic historical photos.  And Lawrence Migdale’s sensitive photographs in Migrant

Worker: A Boy from the Rio Grande Valley (1996), written by Diane Hoyt-Goldsmith,  demonstrate ways in which child labor still occurs in the contemporary United States.  As youngsters experience the first days of this new school year, comparing their own recent photos—particularly ones taken at school—with ones in these books might be educational experiences in themselves.

Happy Labor Day as you add new school days to your memories!