What would composer Aaron Copeland have made of the Jewish Film Festival in Bozeman, Montana, now in its second season?  The Jewish, Brooklyn-born and raised Copeland (1900 – 1990) made notable use of his klezmer-infused, cityscape youth in many musical pieces, yet Copeland is probably best-known for musical works emblematic of the expansive American West.  The Billy the Kid suite (1939),  Rodeo (1942), and Appalachian Spring (1944)—all regularly performed by high school orchestras and aired on public radio stations—were created by the bar mitzvahed, agnostic son of Russian Jewish immigrants.  Originally, their family name was Kaplan. 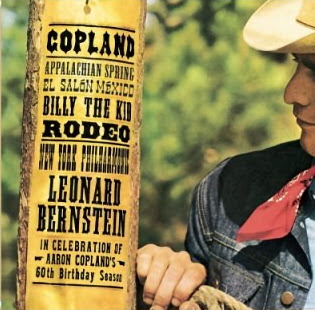 Copeland himself credited his early fascination with the pioneering American spirit to movies.  He explained, “I suppose in one sense it’s a feat of the imagination . . . . But after all, a kid in Brooklyn would’ve seen movies with cowboys in them. . . . I did go out to the southwest fairly early in my career. And, I don’t know, every American kid grows up with a sense of cowboys and what the west must have been like.”  Coming full circle, Copeland’s musical scores for films include one for a Western, The Red Pony (1948), based on a John Steinbeck story collection.  (Copeland’s first, award-winning film score was for the movie version of another Steinbeck work, Of Mice and Men [1938],  set in the ranch land of Depression-era California.)

I thought about the unlikely conjunction of Brooklyn and Bozeman the other night, as my husband Don spoke about watching a Jewish Film Festival offering with our son Daniel, who now works for Montana State University-Bozeman.  A few days earlier they had also gone out to another movie revival, part of a series of classic Westerns, John Ford’s The Man Who Shot Liberty Valance (1962).

What feats our imaginations can indeed accomplish!  As a tween, I loved singer Gene Pitney’s crooning of that movie’s title song so much, played a 45 RPM record of it so often, that I always hear Pitney’s lush voice over the film credits—even though the Pitney version was not released until weeks after the movie’s debut.  I guess Gene Pitney is part of my Brooklyn-bred, city kid’s dream of the American West. 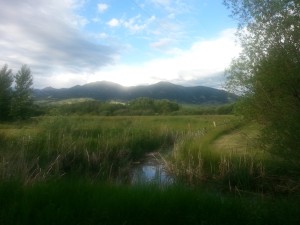 Now that I too have visited Bozeman, walking its friendly streets and viewing the magnificent vistas of the aptly-named Big Sky state, I appreciate Copeland’s musical renditions of the West—ebullient, witty, solemn, grand—even more.  He really got so much of it so right!  Yet the West Copeland dreamed about and created really never contained just one melody, and nowadays it contains many more.  There is a Jewish Film Festival now in Bozeman, with wailing klezmer clarinets somewhere in the air. And before that, there were Jewish merchants in Montana as early as the 1870s, with a synagogue established in Helena in 1890.

Today, there is also probably sitar music along with the two great Indian restaurants we visited, and perhaps Korean drums, Arabic ouds, and Japanese  flutes, too.  (Our son helps international students find their niches at the university.)  And the songs and chants of the Black Feet and Crow peoples, among other tribes, have always been there . . . .

Sometimes reality is better, richer, and more complicated than one’s dreams—worth the extra effort to discover and explore.  Sometimes, though, dreams may  turn out to be dismaying or disappointing. I was delighted a few years ago when the Western Writers of America considered a biography I had written about a 19th century Northern Paiute leader —Sarah Winnemucca: Scout, Activist, and Teacher (2006)—for one of its prestigious Spur Awards.  I felt a little like Aaron Copeland back then, in my own much smaller way another Brooklyn-born kid imaginatively taking part in and recreating the Old West.

I am still honored to have a wall plaque above my desk that declares my book to have been a finalist in the WWA’s 2007 Best Western Juvenile Nonfiction Competition.  Even though I had dreamed of winning the award, I probably would not have enjoyed displaying it in my office nearly 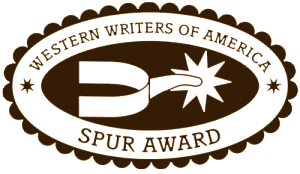 as much. Each Golden Spur Award is an actual, three-dimensional gilt spur mounted on a similar wall plaque—a reality I could never have appreciated without a wry smile and shake of the head.  I admit to my limited experience and world view here, which make spurs still the stuff of other people’s lives, of history and the movies.  For me, some connections between Brooklyn and Bozeman still remain best left to the imagination. . .  unless and until Daniel shares other global airs now current in Bozeman, ones following Aaron Copeland’s dream.