Sunny Side Ups and Downs

Posted on September 1, 2015 by rosinskynatalie

Life’s ups and downs for ten-year olds are very different from those of senior citizens.  Yet there is also common ground that ultimately unites ten-year old Sunny Lewin and her Gramps in Sunny Side Up (2015).  This brand-new, semi-autobiographical memoir from author Jennifer L. Holm and her illustrator brother Matthew Holm (the gifted creators of the wildly popular, award-winning Babymouse series [2005 – 2015]) at times had me ruefully laughing out loud.  Many of the scenes set in Gramps’ “55 and Over” Florida retirement community are painfully familiar to me, living as I do in a suburban “seniors” cooperative building!  Just as the Babymouse books, marketed to 7 to 10 year olds, hold value for readers of all

ages, Sunny Side Up will also have wide appeal.  Similarly, I think that anyone young at heart will appreciate Jennifer Holm’s two start-of-the-school-year books, Middle School is Worse than Meatloaf (2007; 2011) and Eighth Grade is Making Me Sick  (2012; paperback published just this month).  Even though these books about tween-to-teen Ginny Davis (“told through stuff” by illustrator Elicia Castaldi) are supposedly best for 8 to 14 year olds, they resonate much more widely. And isn’t that joyful news for those of us in our “sunset” years!  These three books are the focus of this month’s post.

What has led up to Sunny’s being sent to spend a summer month with Gramps?  Even though he is welcoming, it is obvious that the “Pine Palms Retirement Community” in August, 1976 is an incongruous place for kids.  Sunny veers between being bored and being bewildered by its rules and traditions, such as racing out for late afternoon “Early Bird” supper specials.   The Holms do a great job of revealing the mystery behind Sunny’s visit slowly, switching back and forth between that month and the preceding year in Sunny’s Pennsylvania home town.  Along the way, colorist Lark Pien’s hues capture both the bright colors of daytime Florida and the more varied, subdued tones of seasonal Pennsylvania.

As in the Babymouse books, the Holms skillfully integrate words and images to tell their story.  At times, they achieve this with images that belie what is said—for instance, Sunny’s unhappy face when she replies that she can’t wait to see what Gramps has planned.  At other times, Matthew Holm’s drawings expand the impact of Jennifer Holm’s words.  The shadow of Sunny’s older brother literally looms over her in a classroom, as a new teacher learns Sunny is related to the trouble-making teen.  Readers come to see the impact of his drug abuse on the entire family—both through specific events and through the way these figure in Sunny’s imagination, after she reads about the volcanic destruction of ancient Pompeii.  Towards the end of her sheltering month with Gramps, Sunny herself finds the strength to “explode” into action.  The superhero comics she has been reading with the one other kid at Pine Palms, its Hispanic groundskeeper’s son Buzz, inspire her.  Sunny confronts Gramps after throwing away the cigarettes the wheezing, coughing man has continued to hide and smoke.  She will not let another beloved family member harm himself with substance abuse.

Sunny Side Up tackles a serious subject, but not in a heavy-handed or simplistic way.  Even as the Holms fill this book with 1970s details that will make older readers nostalgic (rotary phones! wire carousels stacked high with comic books!), they include humorous Florida situations as well as emotionally complex Pennsylvania scenes.  And, as in the Babymouse series, close-ups alternate with more distant views, and panel size and perspective vary, in ways that enhance the story’s pace and overall impact.  This impact is finally a hopeful, joyful one—Sunny leaves Florida with souvenir Mickey Mouse ears, photos of Pine Palms residents enjoying Disney World in ways they never expected, gift comics from Buzz and his family, and a smile on her face. A final note from Jennifer and Matthew Holm explains how their own family experience led them to write this book and offers suggestions for any young readers with a relative who is abusing drugs.

Serious topics treated with deft humor and visual punch are also the hallmark of Jennifer Holm’s back-to-school books, Middle School is Worse than Meatloaf and Eighth Grade is Making Me Sick.  Here as well readers are called upon to “detect”  conclusions about character Ginny Davis’ experiences—first in 7th grade and later in 8th—by carefully observing the “stuff” in her life. There are no conventional, all-text pages.  Instead, illustrator Elicia Castaldi smartly digitalizes and arranges on each page such objects as “to do” lists, school schedules and essays, bank account statements, post-it notes left on refrigerators, computerized Instant Messages, holiday cards, and newspaper announcements.  These collages represent the challenges and changes Ginny faces between the ages of twelve and thirteen, some of which are common among tweens (what to wear, how to be popular and attractive, how to earn and manage money) and some that are more unusual.  During these years, Ginny’s widowed mother remarries and has a baby.  Her new stepfather loses his job.  We are left to “read between the lines” of the wedding announcement, a huge hospital bill for a premature delivery, bills for car repairs, and several pages later on a realtor’s listing for the financially-troubled family’s house.

Another storyline in these books anticipates elements of Sunny Side Up, as Ginny’s prank-playing older brother Henry gets into trouble with the law.  Illustrator Matthew Holm makes “guest appearances” throughout both books, drawing comic strips supposedly written by Henry.  These strips show both Henry’s recklessness and the underlying love of family and remorse that, along with some tough love from his mother and stepfather, ultimately help this roguish character stay on the right side of the law.  It is fascinating to see how much  people’s personalities and relationships are conveyed through briefly worded notes and the juxtaposition of related items, such as airline tickets, movie rental receipts, and celebrity convention tickets.   We get a real sense not just of Ginny and her friends (including the pesky classmate who turns into her first date) but of the adults in her life: parents, grandfather, teachers, and even doctors.   And—while Ginny does experience disconcerting change along with earlier, tragic loss—as in Sunny Side Up,  these back-to-school books end on a realistically positive note.  Ginny Davis is so ready for 9th grade and its new and ongoing adventures! 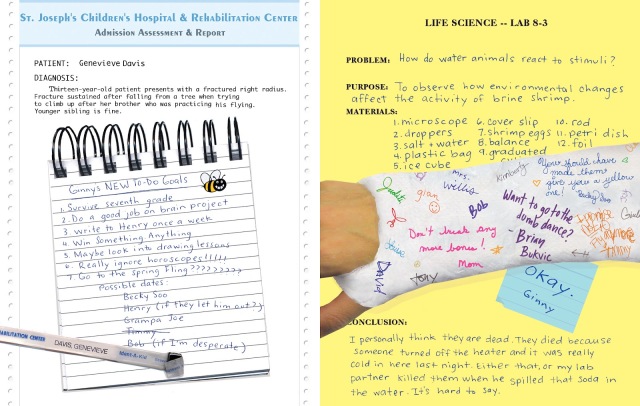 I do not know if Jennifer Holms and Elicia Castaldi will collaborate on another award-winning book about this character, but I plan now to catch up with some of Jennifer Holm’s other (non-graphic) award-winners for tween literature.  Library copies of Turtle in Paradise (2010), one of her Newberry Honor Books, and The Fourteenth Goldfish (2014) are already on my book

shelves. These books both deal with family relationships—with Goldfish imaginatively highlighting a grandfather and granddaughter.   Elicia Castaldi’s collages make me eager to revisit other collage-rich books, such as author/illustrator Faith Ringgold’s multiple award-winning, imaginative Tar Beach (1991).  Perhaps you have your own collage-illustrated favorites . . . ?

I can reassure readers young and old who have consumed all of the current Babymouse books (numbers 1 through 19) that in April, 2016 we will see the publication of volume 20—Baby Mouse Goes for the Gold.  Until then, young readers may want to try out some of the activities for kid fans at the publisher’s website, which also hosts activities for Jennifer and Matthew Holm’s newer graphic series.  Its hero is a daydreaming amoeba named Squish!   Some science facts relevant to the school curriculum are tucked in there, within and between Squish’s oozy, submicroscopic adventures.  Ready or not, it’s September, the exciting start of school days (and school daze) here in North America.  Happy reading, everyone! Don’t let the age designations on books limit your reading pleasure . . . or the reading joys of the young people in your life.