Posted on January 7, 2014 by natalierosinsky

The years seem to speed by these days, yet I remember when it felt as though I had all the time in the world. In fact, as a child the wait to become grown-up seemed impossibly long. Ironically, some of my childhood experiences remain more vivid today than some sights and sounds that are just a decade old. Neuroscientist David Eagleman, who studies time and memory, explains that our brains record more details about new experiences than familiar ones. That is why so many childhood memories—recollections of assorted ‘first-times’—stay fresh in our minds. Strong emotions can also make time seem to slow down in moments of danger. According to Eagleman, “Clocks offer at best a convenient fiction….” He and other scientists have observed that the human brain is connected to “a hodgepodge of systems, each devoted to a different time scale—the cerebral equivalent of a sundial, an hourglass, and an atomic clock.” One clock or yearly calendar is really not enough to measure how people actually experience time.

Two recent books by gifted graphic novelist Gilbert Hernandez play with this subjective experience of time in bold, satisfying, yet dramatically different ways. Marble Season (2013) through its storytelling seems to expand time, while the narrative in Julio’s Day (2013) compresses time. Both books are stand-alone novels, not part of Hernandez’s series set in fictional Palomar, which appeared in the larger Love and Rockets series he and his brothers began in the 1980s. Marble Season will be enjoyed by readers of all ages (though older readers will ‘get’ more of its nuances). Some harsh events and depictions of sex make Julio’s Day a work better suited for teens already tackling adult life and issues. 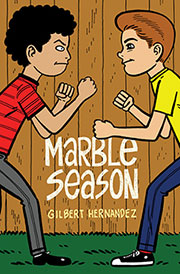 Marble Season follows a group of children in a mainly Mexican-American neighborhood in 1960s California. The book depicts a seemingly endless succession of childhood days, with only a background high-in-the-sky sun or darkened house silhouette to mark time passing. Huey, the central character in this semi-autobiographical work, is as obsessed with comics, TV shows, and popular music as its working-class author/illustrator was in the mid-1960s, when he too was roughly 8 to 11 years old. Whenever Huey, his brothers, and neighborhood kids talk, characters such as Superman, Officer Toody from Car 54, Where Are You?, and that sensational new singing group, the ‘Beatos,’ are central topics of conversation. (For today’s readers, Hernandez includes an Afterword, identifying page-by-page all the pop culture references in the book.) Huey even scripts his own plays featuring superhero adventures, sometimes using his G.I. Joe action hero and other times costuming himself as Captain America. How other kids respond to Huey’s enthusiasm—some mockingly, others with superficial interest, only one or two with equal passion—is painfully realistic. Hyperactive Lucio is predictably unreliable. Hernandez’s dialogue captures the rhythms of childish taunts and of Huey’s hesitations such as “Well, we … I just wanted to … OK, We’re done.” Another childhood reality is the way Huey’s daily life is limited by a tagalong toddler brother and an older brother, whose ‘grounding’ also affects Huey’s access to comics. 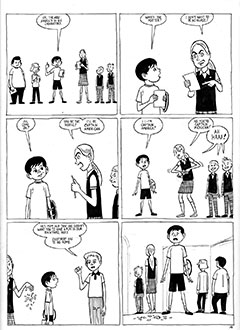 Sharp, clear lines capture the quizzical expressions, slumped shoulders, and proud posturing of these characters in their changing interactions with each other. Visuals are often key here, since many of Marble Season’s black-and-white panels are wordless, encouraging readers to draw our own conclusions about events and to experience time the way the characters do. Hernandez’s omission of word boxes, often used to indicate time, is another technique that focuses reader attention on the characters’ experience. This is true of the younger girl who, in several panels depicting painful attempts, manages to secretly swallow rather than play with Huey’s marbles. It is also true of the toddler brother who waits, eye wide-open, during a seemingly endless nap time. Childhood itself seems endless, yet Huey has mixed feelings about leaving it. On the last page of Marble Season, as he confides to a playmate, “I guess what can be scary sometimes is thinking about what I’ll be like in the future. I just hope I like being a grown up.”

Because kids grow up at different rates and in different ways, as Hernandez’s work shows, “season” is a great word to describe childhood. This word’s open-endedness is much more apt than calendar dates and years. Huey is not interested in the Cinderella movie that fascinates his neighborhood age-mate Patty, who thinks Huey may come to appreciate clothes and romance when they are both teenagers. Yet older Lana Diaz, a baseball-playing tomboy, shocks the neighborhood when as a teenager she puts on a dress for what seems to be the first time. Her progression into conventional adolescence has not proceeded at the same pace as other girls. And not everyone evolves in that era’s conventional ways. There is the other teen girl who is shown eyeing demurely-clad Lana with wide-eyed interest. There is the long, unvoiced look exchanged between Elwin (who would rather be a chef than play football) and Clifford (who has taunted the “sissy white boy” at school) but admits that he is “scared of girls.” The lyrics then shown issuing from a passing transistor radio—“You can’t hurry love… No, you just have to wait”—suggest that Clifford’s path to love, as someone with unrecognized homosexual feelings, may be thorny as well as long. (The Afterward to Marble Season written by Corey K. Creekmur for adult readers touches upon some of these elements, as it places this novel within the history of American comics and pop culture overall.)

Marble Season was specifically mentioned in the PEN USA Literary Award Hernandez won in 2013 for lifetime achievement in graphic literature. Yet Julio’s Day, published a few months before Marble Season, is even more dazzling in its treatment of time. We track its long-lived Mexican-American protagonist from birth to death—100 years that, as Brian Evanson notes in his Introduction, are also the “life of a century”—beginning in 1900 and ending in 2000. But in remarkable time compression, each year is highlighted in just one page! Akin to time-lapse photos, these graphic “snapshots” show dramatic changes in characters’ appearance and encompass four generations. Hernandez’s inclusion of an introductory graphic legend—a page identifying characters’ faces in different stages of life and their family connections—is very useful. Julio’s Day, like Marble Season, omits all panel boxes which traditionally might mark time or comment upon events. Instead, throughout the book, Hernandez employs different sizes and configurations of rectangular panels to spotlight each ‘day’s’ events. 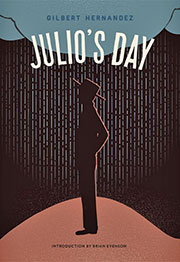 From the first, totally black panel (which turns out to be the interior of newborn Julio’s wailing mouth) to the final totally black panel (the interior of centenarian Julio’s gaping mouth, as he lies dying), we are transfixed by Hernandez’s dramatic uses of black and white. A page of looming, ever-growing storm clouds needs no words to convey young Julio’s dismay after his first day of school. His joy in learning has been destroyed along with the book school bullies rip from his hands as they torment and humiliate him, too. Later, we see how 20th century landmark events—the Depression, droughts, wars, and social upheavals such as the civil and gay rights movements—affect Julio’s extended family. Sadly, unlike a gay great-nephew who lives openly and happily with his partner, Julio himself remains a closeted homosexual, finally denying his only lover and never admitting or acting on his strong feelings for lifelong-friend Tommy. 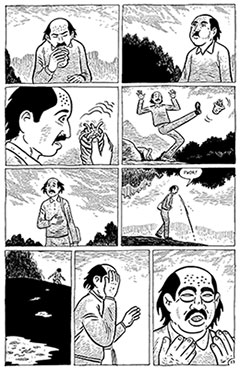 Other family secrets are hinted at through elliptical comments and visual cues that readers must ‘piece together’ for ourselves. One involves the child abuse perpetrated on several generations by Julio’s Uncle Juan. One of Julio’s other great-nephews finally exacts brutal justice on the elderly Juan. Another family mystery is the reason for a difficult journey young Julio’s father undertakes early in the novel. It appears that in this good Catholic family he is a practicing crypto-Jew, a descendent of Jews who escaped the Spanish Inquisition by hiding their true beliefs. Does Julio’s mother exact a terrible price for what is in her eyes heresy, or is what happens to her husband merely bad luck? Teen readers will draw their own conclusions as they read this engrossing, melodramatic but also believable family saga.

As 2014 begins, I look forward to another year of great reading. Even as these years seem to zip by too quickly now, I am comforted by another observation made by neuroscientist David Eagleman: Smaller-bodied creatures, with shorter pathways to the brain than big ones, get more from and live more in each moment than larger critters. I have never been happier to be a petite 4” 11”!