Get Sets for the Holidays!

Posted on December 1, 2019 by rosinskynatalie

Hanukkah, Winter Solstice, Christmas, Kwanzaa—whichever winter holidays you celebrate, sets of graphic books make great, generous gifts for young readers.  Tweens in particular can take delight this holiday season not only in some sets already packaged by publishers but also in “customized” sets you put together just for them.  Today I spotlight a few prepackaged sets but focus on possible ways to customize your own graphic gift sets for tweens. Some concluding suggestions will especially please fans of R. J.  Palacio’s prose novel, Wonder (2012). 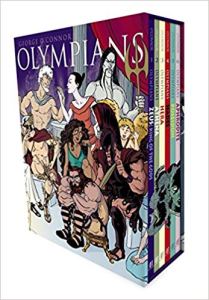 Before that, fans of Rick Riordan’s myth-based prose novels and other readers may relish author/illustrator George O’Connor’s books about the Greek gods.  Six of these twelve volumes—Zeus, Athena, Hera, Hades, Poseidon, and Aphrodite—are available online as a boxed set (2014).   O’Connor visually dramatizes these action-packed tales through shifting viewpoints, close-ups, and full-color illustrations.  He also provides interesting, helpful end-page information about the myths effectively portrayed within each book.  To see if this set would be right for your young reader(s), you can read a brief online excerpt of each book in the series here.

Popular graphic novelist Raina Telgemeier  (whose works I have reviewed here and here) has book sets available in stores as well as online.  Her best-selling memoirs Smile, Sisters, and Guts comprise the most recent boxed set (2019) on store shelves, but The Raina Telgemeier Collection (2018), containing the novels Drama and Ghosts along with Smile and Sisters, showcases the breadth of Telgemeier’s interests.

The Holm siblings also now have a third book in their semi-autobiographical graphic novel series about Sunny, a tween girl in the 1970s.  Sunny Rolls the Dice (2019), about role-playing games and the stereotypical roles of boys and girls, is a smartly funny follow-up to Sunny Side Up (2015, reviewed here) and Swing It, Sunny (2017).  Readers will appreciate how contemporary many of Sunny’s concerns seem even as 1970s gaming details and décor convey an earlier era.  A gift of all three volumes or of the last two would be a fine present for fans of Sunny or of the Holms’ other series.

Graphic gift sets need not be limited to specific authors.  Similar themes could link your selections. The Holms’ Sunny Side Up, which touches upon an older brother’s substance abuse, might be paired with Jarrett J. Krosoczka’s award-winning graphic memoir Hey Kiddo: How I lost My Mother, Found My Father, and Dealt with Family Addiction (2018, reviewed by me here).  His mother’s addiction fuels this author/illustrator’s riveting memoir.  On the other hand, being new and “different” in middle school is addressed by two recent,

stories about its secondary kid characters, collected in Augie & Me: Three Wonder Tales (2015); a book of sayings representing its main schoolteacher, 365 Days of Wonder: Mr. Browne’s Precepts (2016); and a picture book illustrated by Palacio herself, We’re All Wonders (2016). The original novel was made into a successful movie (Wonder, 2017) and even has led to community-wide events, some organized as part of an international “Choose Kind” movement. Now, with a new graphic novel, White Bird: A Wonder Story (2019), Palacio turns again to her first career as an illustrator to create a memorable, moving work—one that will touch older readers as well as tweens.

In White Bird, it is religious difference that falsely and fatally sets people apart. Julien, a thoughtless bully throughout most of Wonder, and whose actions are explored in Augie and Me, asks his French-born grandmother Sara about her past. White Bird, told mainly from her viewpoint, shows us some of what French Jews (among others) experienced at the hands of Nazis and other anti-Semites during World War II. As a Jewish teenager then, Sara went to school with another Julien—a boy mocked by many classmates because polio had left his body twisted and lame. Yet this Julien is kind and brave, as is his family. He rescues Sara and, later, he and his family endure much to keep her safe. Along with some other French non-Jews, they offset the horrors of the Holocaust. Those are mostly alluded to rather than shown in White Bird. (The book does include extensive, well-chosen back matter about the Holocaust, including a suggested reading list and bibliography.) 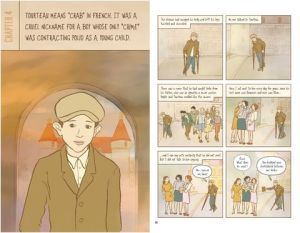 Aided by inker Kevin Czap, Palacio uses pastels for daily life, with some fearsome scenes depicted solely in sepia. Teenage Sara’s most joyful moments, including those experienced with her Julien, blossom into vivid color. Scenes set in fields of bright bluebells are luminous as well. Such scenes support elderly Grandmere’s remark to her grandson that “those were dark times. . . but what has stayed with me the most . . . is not

the darkness . . . but the light.” The titular white bird here signals at different times hope, the imagination, and what Palacio depicts as the soul’s immortality. Similarly, she effectively employs wordless pages to convey very different feelings: young Sara’s fearful imagining of her captured mother’s last days and her bittersweet vision of rescuer Julien’s final moments in 1944. She sees him as his soul runs and then flies free from his polio-wracked, now fatally wounded body. White Bird is narratively strong enough to stand on its own, apart from its Wonder predecessors, but what a great gift set this graphic novel would make paired alongside one or two of those prose books!

Alternatively, you might pair White Bird with a graphic work about today’s refugees. Palacio has Grandmere at the book’s end plaintively note current TV news

about refugee children being separated from their families and the use of “camps” for unwanted refugees. These reports, as a trailer for the book shows, painfully remind her of the Holocaust. This graphic novel’s final image, of protesters with signs saying “Never Again,” gives new currency to that phrase once used mainly about Nazi genocide. Illegal (2018), written by Eoin Colfer and Andrew Donkin and illustrated by Giovanni Rigano, is just one book about the plight of today’s refugees which might be part of such a thematic gift set. Some other possibilities are listed here.